Curtiss-Wright Co. (NYSE:CW – Get Rating) announced a quarterly dividend on Thursday, May 12th, Wall Street Journal reports. Investors of record on Friday, June 17th will be given a dividend of 0.19 per share by the aerospace company on Friday, July 1st. This represents a $0.76 dividend on an annualized basis and a dividend yield of 0.55%. The ex-dividend date is Thursday, June 16th. This is an increase from Curtiss-Wright’s previous quarterly dividend of $0.18.

Curtiss-Wright (NYSE:CW – Get Rating) last posted its quarterly earnings results on Wednesday, May 4th. The aerospace company reported $1.31 earnings per share for the quarter, topping analysts’ consensus estimates of $1.20 by $0.11. The business had revenue of $559.46 million during the quarter, compared to the consensus estimate of $579.97 million. Curtiss-Wright had a net margin of 10.06% and a return on equity of 15.35%. Curtiss-Wright’s revenue for the quarter was down 6.3% compared to the same quarter last year. During the same period in the previous year, the firm posted $1.51 earnings per share. As a group, analysts expect that Curtiss-Wright will post 8.2 EPS for the current year.

In other Curtiss-Wright news, Chairman David Charles Adams sold 4,262 shares of the stock in a transaction on Wednesday, February 16th. The shares were sold at an average price of $137.25, for a total value of $584,959.50. The sale was disclosed in a legal filing with the Securities & Exchange Commission, which is available at this link. Also, CFO K Christopher Farkas sold 435 shares of the firm’s stock in a transaction dated Tuesday, March 15th. The stock was sold at an average price of $144.66, for a total transaction of $62,927.10. The disclosure for this sale can be found here. Insiders have sold 24,335 shares of company stock valued at $3,566,091 in the last three months. 0.62% of the stock is owned by insiders. 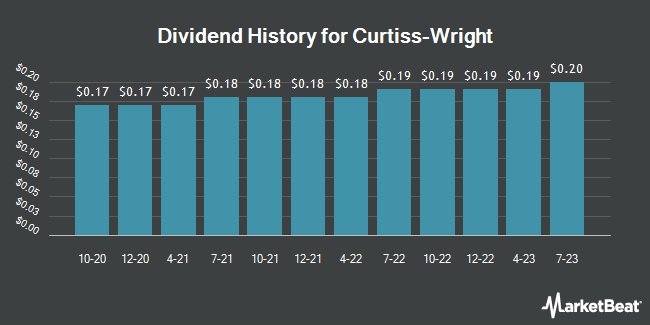 Complete the form below to receive the latest headlines and analysts' recommendations for Curtiss-Wright with our free daily email newsletter: