Dolby Laboratories, Inc. (NYSE:DLB – Get Rating) SVP John D. Couling sold 500 shares of the business’s stock in a transaction dated Wednesday, May 11th. The shares were sold at an average price of $72.61, for a total transaction of $36,305.00. Following the completion of the transaction, the senior vice president now owns 80,172 shares in the company, valued at $5,821,288.92. The transaction was disclosed in a legal filing with the Securities & Exchange Commission, which can be accessed through this hyperlink.

The firm also recently declared a quarterly dividend, which will be paid on Wednesday, May 25th. Investors of record on Tuesday, May 17th will be paid a dividend of $0.25 per share. This represents a $1.00 dividend on an annualized basis and a dividend yield of 1.36%. The ex-dividend date of this dividend is Monday, May 16th. Dolby Laboratories’s payout ratio is currently 48.31%. 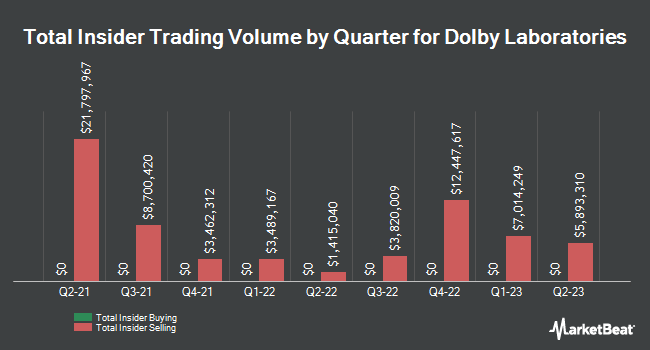