SiTime (NASDAQ:SITM – Get Rating) was downgraded by Zacks Investment Research from a “hold” rating to a “strong sell” rating in a research report issued to clients and investors on Friday, Zacks.com reports.

Several other research firms have also weighed in on SITM. TheStreet lowered shares of SiTime from a “c-” rating to a “d” rating in a research note on Wednesday, April 27th. Needham & Company LLC reduced their price objective on shares of SiTime from $330.00 to $300.00 and set a “buy” rating on the stock in a research note on Thursday, February 3rd. One research analyst has rated the stock with a sell rating and five have issued a buy rating to the company’s stock. According to MarketBeat, the company has an average rating of “Buy” and an average price target of $301.83.

SiTime (NASDAQ:SITM – Get Rating) last posted its quarterly earnings data on Wednesday, May 4th. The company reported $0.94 earnings per share for the quarter, beating the consensus estimate of $0.76 by $0.18. SiTime had a net margin of 16.56% and a return on equity of 8.76%. The firm had revenue of $70.25 million during the quarter, compared to analysts’ expectations of $65.00 million. During the same quarter last year, the company posted ($0.20) EPS. The company’s quarterly revenue was up 97.7% compared to the same quarter last year. On average, sell-side analysts expect that SiTime will post 1.66 EPS for the current fiscal year.

About SiTime (Get Rating) 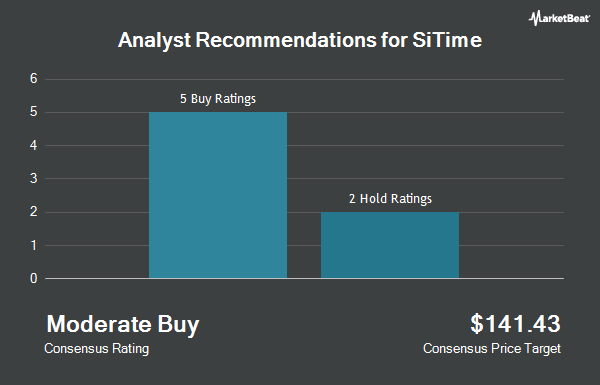 Receive News & Ratings for SiTime Daily - Enter your email address below to receive a concise daily summary of the latest news and analysts' ratings for SiTime and related companies with MarketBeat.com's FREE daily email newsletter.

Head to Head Analysis: Enovix and Its Rivals

Comparing Autoscope Technologies and The Competition

Complete the form below to receive the latest headlines and analysts' recommendations for SiTime with our free daily email newsletter: