Shares of Warby Parker Inc. (NYSE:WRBY – Get Rating) have earned an average recommendation of “Hold” from the ten analysts that are presently covering the firm, Marketbeat.com reports. One equities research analyst has rated the stock with a sell recommendation, two have assigned a hold recommendation and four have issued a buy recommendation on the company. The average 12 month target price among brokers that have issued ratings on the stock in the last year is $41.00.

In other Warby Parker news, CEO David Abraham Gilboa sold 5,354 shares of the firm’s stock in a transaction that occurred on Thursday, March 10th. The shares were sold at an average price of $25.00, for a total value of $133,850.00. The sale was disclosed in a filing with the Securities & Exchange Commission, which is available through the SEC website. Also, major shareholder Durable Capital Partners Lp bought 315,504 shares of the stock in a transaction on Wednesday, February 16th. The stock was purchased at an average price of $30.31 per share, with a total value of $9,562,926.24. The disclosure for this purchase can be found here. Insiders have sold a total of 30,446 shares of company stock worth $857,968 over the last 90 days.

Warby Parker (NYSE:WRBY – Get Rating) last announced its quarterly earnings results on Thursday, March 17th. The company reported ($0.08) earnings per share (EPS) for the quarter, beating the consensus estimate of ($0.10) by $0.02. The company had revenue of $132.89 million for the quarter, compared to analysts’ expectations of $133.35 million. During the same quarter in the prior year, the firm earned ($0.04) EPS. Warby Parker’s quarterly revenue was up 17.8% compared to the same quarter last year. As a group, equities analysts predict that Warby Parker will post -0.01 EPS for the current year. 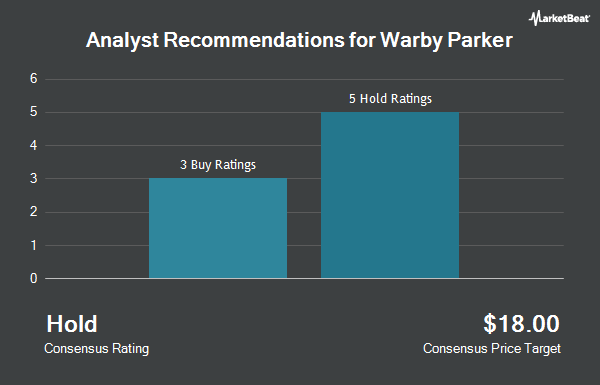 Complete the form below to receive the latest headlines and analysts' recommendations for Warby Parker with our free daily email newsletter: