$250.15 Million in Sales Expected for CubeSmart (NYSE:CUBE) This Quarter

Equities analysts expect that CubeSmart (NYSE:CUBE – Get Rating) will report sales of $250.15 million for the current fiscal quarter, Zacks Investment Research reports. Three analysts have provided estimates for CubeSmart’s earnings, with the lowest sales estimate coming in at $249.00 million and the highest estimate coming in at $251.60 million. CubeSmart reported sales of $199.25 million during the same quarter last year, which would suggest a positive year over year growth rate of 25.5%. The firm is scheduled to announce its next earnings results on Monday, January 1st.

On average, analysts expect that CubeSmart will report full-year sales of $985.29 million for the current fiscal year, with estimates ranging from $931.76 million to $1.01 billion. For the next fiscal year, analysts anticipate that the business will post sales of $1.05 billion, with estimates ranging from $959.67 million to $1.08 billion. Zacks Investment Research’s sales averages are a mean average based on a survey of sell-side research analysts that that provide coverage for CubeSmart.

CubeSmart (NYSE:CUBE – Get Rating) last announced its earnings results on Thursday, April 28th. The real estate investment trust reported $0.17 earnings per share (EPS) for the quarter, missing the consensus estimate of $0.57 by ($0.40). CubeSmart had a return on equity of 10.78% and a net margin of 26.65%. The firm had revenue of $238.57 million during the quarter, compared to analysts’ expectations of $240.13 million. During the same period in the previous year, the business posted $0.47 earnings per share. The company’s revenue for the quarter was up 26.3% on a year-over-year basis.

Several research analysts have weighed in on CUBE shares. Zacks Investment Research downgraded shares of CubeSmart from a “buy” rating to a “hold” rating in a research report on Friday, March 11th. StockNews.com raised CubeSmart from a “sell” rating to a “hold” rating in a report on Thursday, May 5th. Finally, JPMorgan Chase & Co. boosted their price target on CubeSmart from $57.00 to $58.00 and gave the company a “neutral” rating in a report on Monday, April 4th. One research analyst has rated the stock with a sell rating, six have given a hold rating and two have issued a buy rating to the stock. According to data from MarketBeat.com, the company presently has a consensus rating of “Hold” and an average target price of $52.13.

The company also recently announced a quarterly dividend, which was paid on Monday, April 18th. Investors of record on Friday, April 1st were issued a $0.43 dividend. This represents a $1.72 annualized dividend and a yield of 3.98%. The ex-dividend date was Thursday, March 31st. CubeSmart’s dividend payout ratio is currently 163.81%.

A number of large investors have recently bought and sold shares of the business. Curi Wealth Management LLC bought a new position in shares of CubeSmart in the fourth quarter worth about $26,000. PSI Advisors LLC bought a new position in CubeSmart in the 1st quarter worth approximately $26,000. Focused Wealth Management Inc purchased a new stake in CubeSmart during the 1st quarter valued at approximately $26,000. Evoke Wealth LLC bought a new stake in shares of CubeSmart during the third quarter valued at approximately $27,000. Finally, MUFG Americas Holdings Corp lifted its holdings in shares of CubeSmart by 97.5% in the fourth quarter. MUFG Americas Holdings Corp now owns 472 shares of the real estate investment trust’s stock worth $27,000 after buying an additional 233 shares in the last quarter. 95.92% of the stock is currently owned by institutional investors and hedge funds.

CubeSmart is a self-administered and self-managed real estate investment trust. The Company's self-storage properties are designed to offer affordable, easily accessible and secure storage space for residential and commercial customers. According to the 2020 Self-Storage Almanac, CubeSmart is one of the top three owners and operators of self-storage properties in the United States. 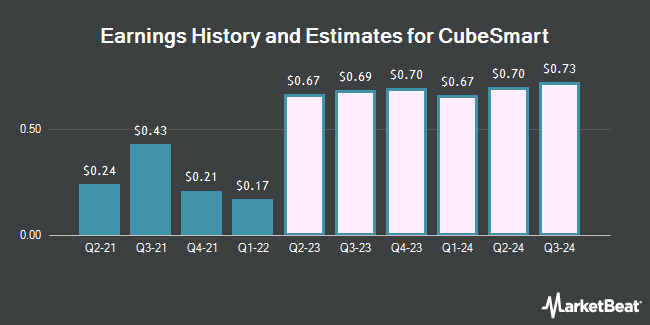 Complete the form below to receive the latest headlines and analysts' recommendations for CubeSmart with our free daily email newsletter: