Shares of Boston Scientific Co. (NYSE:BSX – Get Rating) have received a consensus rating of “Buy” from the thirteen ratings firms that are currently covering the firm, Marketbeat Ratings reports. Four analysts have rated the stock with a hold rating, seven have issued a buy rating and one has given a strong buy rating to the company. The average 12 month target price among brokerages that have issued a report on the stock in the last year is $49.17.

Boston Scientific (NYSE:BSX – Get Rating) last posted its quarterly earnings results on Wednesday, April 27th. The medical equipment provider reported $0.39 earnings per share (EPS) for the quarter, meeting the consensus estimate of $0.39. Boston Scientific had a net margin of 6.65% and a return on equity of 14.60%. The business had revenue of $3.03 billion during the quarter, compared to the consensus estimate of $2.95 billion. During the same quarter last year, the firm posted $0.37 EPS. Boston Scientific’s revenue was up 10.0% compared to the same quarter last year. On average, analysts anticipate that Boston Scientific will post 1.76 EPS for the current fiscal year. 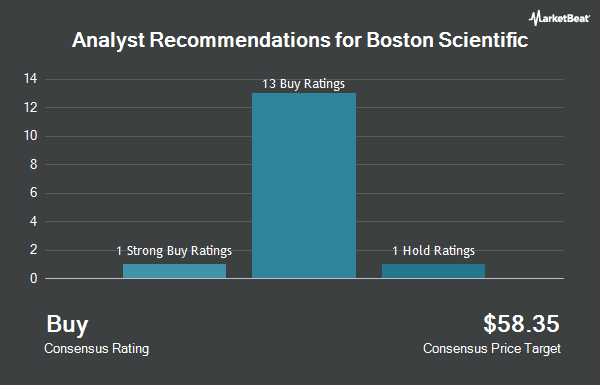 Deutsche Börse Given a €192.00 Price Target at UBS Group