Paycom Software, Inc. (NYSE:PAYC – Get Rating) EVP Justin Devon Long sold 151 shares of the stock in a transaction on Wednesday, May 11th. The stock was sold at an average price of $275.23, for a total value of $41,559.73. Following the transaction, the executive vice president now owns 2,956 shares in the company, valued at approximately $813,579.88. The transaction was disclosed in a document filed with the SEC, which is available through the SEC website.

Paycom Software (NYSE:PAYC – Get Rating) last released its quarterly earnings data on Tuesday, May 3rd. The software maker reported $1.90 EPS for the quarter, beating the consensus estimate of $1.75 by $0.15. The firm had revenue of $353.52 million during the quarter, compared to the consensus estimate of $343.20 million. Paycom Software had a return on equity of 25.12% and a net margin of 19.64%. The company’s quarterly revenue was up 29.9% on a year-over-year basis. During the same quarter in the previous year, the company posted $1.10 earnings per share. On average, equities research analysts anticipate that Paycom Software, Inc. will post 4.3 earnings per share for the current year. 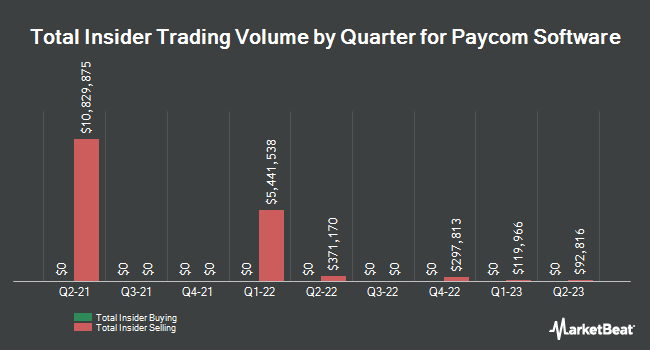