Seagen Inc. (NASDAQ:SGEN – Get Rating) CEO Clay B. Siegall sold 17,043 shares of the company’s stock in a transaction dated Thursday, May 12th. The shares were sold at an average price of $125.69, for a total transaction of $2,142,134.67. Following the transaction, the chief executive officer now owns 666,060 shares in the company, valued at approximately $83,717,081.40. The sale was disclosed in a filing with the Securities & Exchange Commission, which is available at the SEC website.

Seagen (NASDAQ:SGEN – Get Rating) last posted its quarterly earnings data on Thursday, April 28th. The biotechnology company reported ($0.74) EPS for the quarter, beating the consensus estimate of ($0.98) by $0.24. The firm had revenue of $426.50 million during the quarter, compared to analyst estimates of $401.75 million. Seagen had a negative net margin of 41.32% and a negative return on equity of 21.86%. The company’s revenue for the quarter was up 28.5% on a year-over-year basis. During the same quarter last year, the business posted ($0.67) EPS. Equities analysts forecast that Seagen Inc. will post -3.51 earnings per share for the current year. 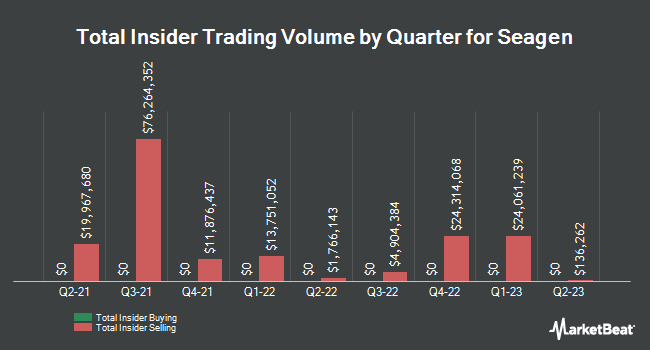