Protagonist Therapeutics (NASDAQ:PTGX – Get Rating) was upgraded by StockNews.com from a “sell” rating to a “hold” rating in a research note issued to investors on Thursday.

A number of other research analysts also recently commented on the company. Zacks Investment Research downgraded Protagonist Therapeutics from a “buy” rating to a “hold” rating in a research note on Wednesday. BTIG Research cut their price target on shares of Protagonist Therapeutics from $55.00 to $45.00 in a report on Tuesday, April 26th. Two investment analysts have rated the stock with a hold rating and eight have assigned a buy rating to the stock. According to data from MarketBeat.com, the company currently has an average rating of “Buy” and an average target price of $52.56.

Protagonist Therapeutics, Inc, a biopharmaceutical company, discovers and develops peptide-based therapeutic drugs to address hematology and blood disorders, and inflammatory and immunomodulatory diseases. It is developing rusfertide (PTG-300), an injectable hepcidin mimetic that is in Phase II clinical trials for the treatment of patients with polycythemia vera and hereditary hemochromatosis, as well as for the treatment of other blood disorders; PN-943, an oral, alpha-4-beta-7 integrin- specific antagonist peptide that is in Phase II clinical trials for treating inflammatory bowel disease (IBD); and PN-235, an orally delivered interleukin-23 receptor specific antagonist for the treatment of IBD and non-IBD indications. 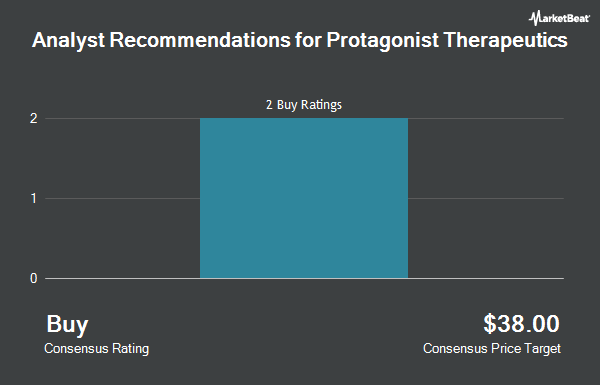 SmartFinancial Upgraded to “Buy” at StockNews.com

Ingevity Upgraded by StockNews.com to Strong-Buy

IAC/InterActiveCorp Downgraded by StockNews.com to “Sell”

Complete the form below to receive the latest headlines and analysts' recommendations for Protagonist Therapeutics with our free daily email newsletter: