ShotSpotter (NASDAQ:SSTI – Get Rating) was downgraded by Zacks Investment Research from a “hold” rating to a “sell” rating in a note issued to investors on Saturday, Zacks.com reports.

According to Zacks, “ShotSpotter, Inc. is involved in designing and delivering gunfire alert and analysis solutions. The Company’s product consists of ShotSpotter Flex, ShotSpotter SiteSecure and SecureCampus. It operates primarily in United States, Puerto Rico, the U.S. Virgin Islands and South Africa. ShotSpotter, Inc. is headquartered in California, USA. “

Separately, Lake Street Capital reduced their target price on shares of ShotSpotter from $42.00 to $29.00 in a report on Wednesday, February 23rd. One analyst has rated the stock with a sell rating, two have given a hold rating and three have given a buy rating to the company. According to data from MarketBeat.com, the stock has a consensus rating of “Hold” and a consensus target price of $46.00.

ShotSpotter (NASDAQ:SSTI – Get Rating) last posted its quarterly earnings data on Tuesday, February 22nd. The company reported ($0.12) earnings per share (EPS) for the quarter, missing analysts’ consensus estimates of $0.01 by ($0.13). The business had revenue of $13.97 million during the quarter, compared to the consensus estimate of $16.03 million. ShotSpotter had a negative net margin of 6.41% and a negative return on equity of 6.17%. As a group, equities research analysts anticipate that ShotSpotter will post -0.03 earnings per share for the current fiscal year.

In related news, Director Randall Hawks bought 6,695 shares of the business’s stock in a transaction that occurred on Wednesday, March 9th. The shares were acquired at an average cost of $29.82 per share, with a total value of $199,644.90. The transaction was disclosed in a filing with the Securities & Exchange Commission, which can be accessed through this link. Over the last three months, insiders have sold 847 shares of company stock worth $23,068. 10.60% of the stock is owned by insiders.

ShotSpotter, Inc provides precision-policing and security solutions for law enforcement and security personnel in the United States, South Africa, and the Bahamas. Its solutions include ShotSpotter Respond, a public safety solution, which serves cities and municipalities to identify, locate, and deter gun violence by incorporating a real-time gunshot detection system into their policing systems; and ShotSpotter Connect, a patrol management software to help plan directed patrols and tactics to deter a broad set of crime types. 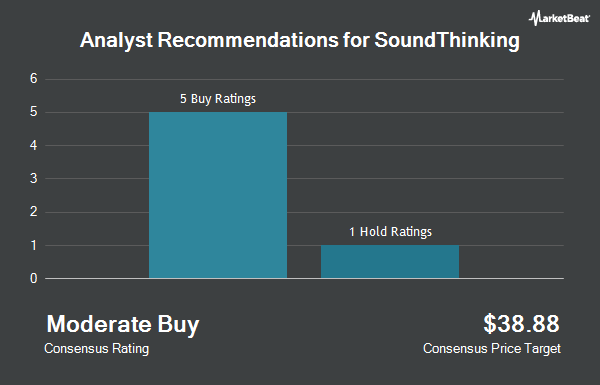 Complete the form below to receive the latest headlines and analysts' recommendations for ShotSpotter with our free daily email newsletter: