Wall Street analysts forecast that First Busey Co. (NASDAQ:BUSE – Get Rating) will report $106.35 million in sales for the current fiscal quarter, Zacks reports. Four analysts have provided estimates for First Busey’s earnings. The highest sales estimate is $107.26 million and the lowest is $104.55 million. First Busey posted sales of $97.55 million in the same quarter last year, which would indicate a positive year-over-year growth rate of 9%. The firm is expected to issue its next earnings results on Monday, January 1st.

According to Zacks, analysts expect that First Busey will report full year sales of $430.11 million for the current year, with estimates ranging from $422.35 million to $434.19 million. For the next financial year, analysts forecast that the business will report sales of $458.93 million, with estimates ranging from $447.58 million to $469.82 million. Zacks’ sales averages are a mean average based on a survey of sell-side analysts that follow First Busey.

First Busey (NASDAQ:BUSE – Get Rating) last released its quarterly earnings results on Tuesday, April 26th. The bank reported $0.52 earnings per share for the quarter, beating the consensus estimate of $0.51 by $0.01. First Busey had a return on equity of 9.83% and a net margin of 25.94%. The firm had revenue of $105.83 million for the quarter, compared to analysts’ expectations of $102.85 million. During the same quarter last year, the firm posted $0.69 EPS.

In related news, Director Stanley J. Bradshaw purchased 4,000 shares of First Busey stock in a transaction that occurred on Friday, April 29th. The shares were acquired at an average cost of $22.52 per share, for a total transaction of $90,080.00. Following the transaction, the director now directly owns 28,600 shares in the company, valued at $644,072. The transaction was disclosed in a document filed with the Securities & Exchange Commission, which can be accessed through the SEC website. 7.40% of the stock is owned by company insiders.

The business also recently declared a quarterly dividend, which was paid on Friday, April 29th. Investors of record on Friday, April 22nd were given a dividend of $0.23 per share. The ex-dividend date was Thursday, April 21st. This represents a $0.92 annualized dividend and a yield of 4.17%. First Busey’s payout ratio is 45.32%.

About First Busey (Get Rating) 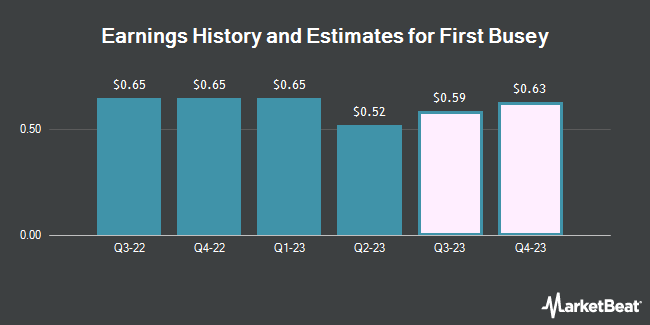