Analysts expect that Box, Inc. (NYSE:BOX – Get Rating) will post sales of $234.20 million for the current quarter, according to Zacks Investment Research. Five analysts have issued estimates for BOX’s earnings, with estimates ranging from $234.00 million to $234.53 million. BOX reported sales of $202.44 million in the same quarter last year, which would suggest a positive year over year growth rate of 15.7%. The firm is scheduled to issue its next quarterly earnings results after the market closes on Monday, January 1st.

According to Zacks, analysts expect that BOX will report full year sales of $993.50 million for the current financial year, with estimates ranging from $992.50 million to $994.65 million. For the next fiscal year, analysts expect that the firm will report sales of $1.11 billion, with estimates ranging from $1.09 billion to $1.13 billion. Zacks Investment Research’s sales averages are a mean average based on a survey of sell-side research analysts that that provide coverage for BOX.

Box, Inc provides a cloud content management platform that enables organizations of various sizes to manage and share their content from anywhere on any device. The company's Software-as-a-Service platform enables users to collaborate on content internally and with external parties, automate content-driven business processes, develop custom applications, and implement data protection, security, and compliance features to comply with legal and regulatory requirements, internal policies, and industry standards and regulations. 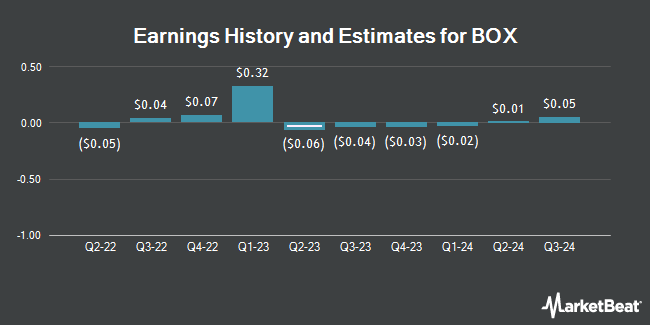