Wall Street brokerages expect that Repligen Co. (NASDAQ:RGEN – Get Rating) will report sales of $189.41 million for the current fiscal quarter, according to Zacks Investment Research. Six analysts have provided estimates for Repligen’s earnings. The highest sales estimate is $192.40 million and the lowest is $183.00 million. Repligen reported sales of $162.96 million during the same quarter last year, which indicates a positive year-over-year growth rate of 16.2%. The firm is expected to report its next earnings report on Monday, January 1st.

Repligen (NASDAQ:RGEN – Get Rating) last announced its quarterly earnings data on Wednesday, April 27th. The biotechnology company reported $0.92 earnings per share (EPS) for the quarter, beating analysts’ consensus estimates of $0.72 by $0.20. Repligen had a net margin of 19.86% and a return on equity of 11.13%. The company had revenue of $206.40 million during the quarter, compared to analysts’ expectations of $185.48 million. During the same quarter in the prior year, the company posted $0.68 EPS. The business’s revenue was up 44.5% on a year-over-year basis.

In other Repligen news, Director Thomas F. Ryan, Jr. sold 2,000 shares of the firm’s stock in a transaction dated Tuesday, March 1st. The shares were sold at an average price of $198.03, for a total value of $396,060.00. The transaction was disclosed in a legal filing with the Securities & Exchange Commission, which is accessible through this hyperlink. Company insiders own 1.10% of the company’s stock. 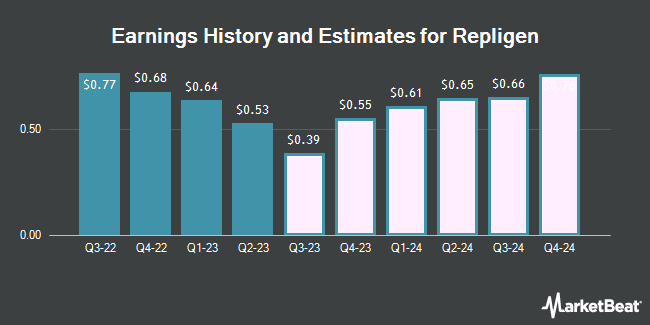