Wall Street analysts predict that Premier, Inc. (NASDAQ:PINC – Get Rating) will post $337.58 million in sales for the current quarter, Zacks reports. Four analysts have issued estimates for Premier’s earnings. The lowest sales estimate is $330.20 million and the highest is $342.05 million. Premier posted sales of $481.52 million during the same quarter last year, which suggests a negative year over year growth rate of 29.9%. The company is scheduled to announce its next quarterly earnings results on Monday, January 1st.

Premier (NASDAQ:PINC – Get Rating) last released its earnings results on Tuesday, May 3rd. The company reported $0.57 earnings per share for the quarter, beating the consensus estimate of $0.52 by $0.05. The company had revenue of $347.84 million during the quarter, compared to the consensus estimate of $340.10 million. Premier had a return on equity of 12.13% and a net margin of 18.14%. Premier’s revenue was down 26.0% compared to the same quarter last year. During the same period in the previous year, the company posted $0.55 EPS.

The company also recently disclosed a quarterly dividend, which will be paid on Wednesday, June 15th. Stockholders of record on Wednesday, June 1st will be issued a $0.20 dividend. This represents a $0.80 annualized dividend and a dividend yield of 2.18%. The ex-dividend date of this dividend is Tuesday, May 31st. Premier’s payout ratio is currently 34.63%.

Premier, Inc, together with its subsidiaries, operates as a healthcare improvement company in the United States. It operates in two segments, Supply Chain Services and Performance Services. The Supply Chain Services segment offers its members with an access to a range of products and services, including medical and surgical products, pharmaceuticals, laboratory supplies, capital equipment, information technology, facilities and construction, and food and nutritional products, as well as purchased services, such as clinical engineering and document shredding. 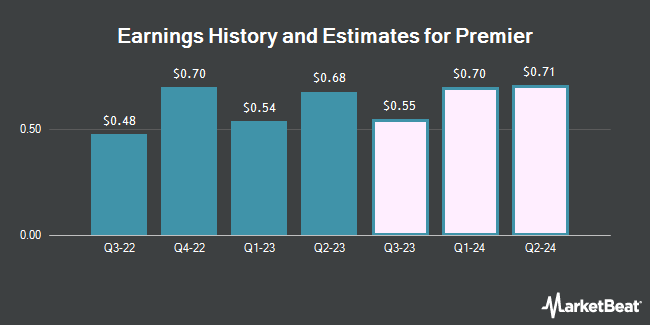 Receive News & Ratings for Premier Daily - Enter your email address below to receive a concise daily summary of the latest news and analysts' ratings for Premier and related companies with MarketBeat.com's FREE daily email newsletter.

Complete the form below to receive the latest headlines and analysts' recommendations for Premier with our free daily email newsletter: