Wall Street brokerages expect Edap Tms S.A. (NASDAQ:EDAP – Get Rating) to report sales of $12.96 million for the current quarter, according to Zacks. Two analysts have made estimates for Edap Tms’ earnings, with estimates ranging from $12.20 million to $13.72 million. Edap Tms posted sales of $12.35 million in the same quarter last year, which would indicate a positive year-over-year growth rate of 4.9%. The firm is scheduled to issue its next quarterly earnings report after the market closes on Monday, January 1st.

According to Zacks, analysts expect that Edap Tms will report full year sales of $61.23 million for the current year, with estimates ranging from $60.12 million to $62.34 million. For the next year, analysts forecast that the firm will report sales of $74.25 million, with estimates ranging from $72.65 million to $75.84 million. Zacks Investment Research’s sales calculations are a mean average based on a survey of research firms that that provide coverage for Edap Tms.

Edap Tms (NASDAQ:EDAP – Get Rating) last issued its quarterly earnings results on Wednesday, March 30th. The medical equipment provider reported $0.04 earnings per share for the quarter, topping analysts’ consensus estimates of $0.01 by $0.03. Edap Tms had a net margin of 1.51% and a return on equity of 1.53%. During the same quarter in the prior year, the firm posted $0.03 earnings per share.

Several brokerages recently issued reports on EDAP. StockNews.com began coverage on shares of Edap Tms in a research note on Thursday, March 31st. They set a “hold” rating on the stock. Zacks Investment Research upgraded Edap Tms from a “sell” rating to a “hold” rating in a report on Tuesday, May 3rd.

EDAP TMS SA, together with its subsidiaries, develops, produces, markets, distributes, and maintains a portfolio of minimally-invasive medical devices for the treatment of urological diseases in Asia, France, the United States, and internationally. It operates in three divisions: High Intensity Focused Ultrasound (HIFU); Extracorporeal ShockWave Lithotripsy (ESWL); and Distribution. 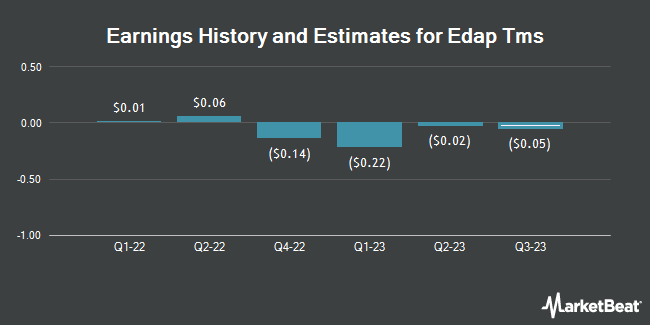 Complete the form below to receive the latest headlines and analysts' recommendations for Edap Tms with our free daily email newsletter: