Brokerages expect Xeris Biopharma Holdings, Inc. (NASDAQ:XERS – Get Rating) to report $25.47 million in sales for the current quarter, according to Zacks. Four analysts have made estimates for Xeris Biopharma’s earnings, with the lowest sales estimate coming in at $24.69 million and the highest estimate coming in at $27.20 million. Xeris Biopharma reported sales of $8.84 million during the same quarter last year, which would suggest a positive year over year growth rate of 188.1%. The business is scheduled to issue its next quarterly earnings report on Monday, January 1st.

On average, analysts expect that Xeris Biopharma will report full year sales of $109.97 million for the current fiscal year, with estimates ranging from $103.00 million to $117.90 million. For the next financial year, analysts anticipate that the business will post sales of $158.63 million, with estimates ranging from $136.00 million to $192.40 million. Zacks Investment Research’s sales averages are a mean average based on a survey of sell-side analysts that follow Xeris Biopharma.

Xeris Biopharma (NASDAQ:XERS – Get Rating) last announced its quarterly earnings results on Thursday, March 10th. The company reported ($0.42) earnings per share for the quarter, missing the consensus estimate of ($0.21) by ($0.21). The firm had revenue of $21.43 million for the quarter, compared to analyst estimates of $20.72 million. Xeris Biopharma had a negative net margin of 217.81% and a negative return on equity of 359.97%. During the same period in the previous year, the firm posted ($0.41) EPS.

In other news, insider Steven Prestrelski sold 11,228 shares of the stock in a transaction dated Tuesday, February 22nd. The shares were sold at an average price of $2.42, for a total transaction of $27,171.76. The sale was disclosed in a legal filing with the SEC, which is available at this link. Also, insider Paul R. Edick purchased 100,000 shares of Xeris Biopharma stock in a transaction dated Thursday, May 12th. The shares were acquired at an average cost of $1.40 per share, for a total transaction of $140,000.00. Following the transaction, the insider now directly owns 1,508,064 shares of the company’s stock, valued at approximately $2,111,289.60. The disclosure for this purchase can be found here. 4.01% of the stock is currently owned by corporate insiders.

Xeris Biopharma Holdings, Inc, a biopharmaceutical company, engages in developing and commercializing therapies for patient populations in endocrinology, neurology, and gastroenterology. The company markets Gvoke, a ready-to-use liquid glucagon for the treatment of severe hypoglycemia; and Keveyis, a therapy for the treatment of hyperkalemic, hypokalemic, and related variants of primary periodic paralysis; and Recorlev, a cortisol synthesis inhibitor proved for the treatment of endogenous hypercortisolemia in adult patients with Cushing's syndrome. 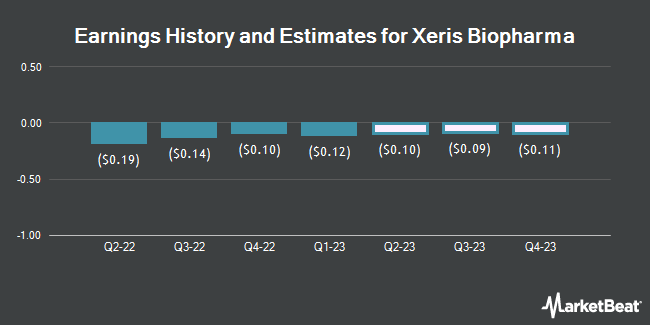 Complete the form below to receive the latest headlines and analysts' recommendations for Xeris Biopharma with our free daily email newsletter: