$90.00 Million in Sales Expected for Ambarella, Inc. (NASDAQ:AMBA) This Quarter

Wall Street brokerages expect Ambarella, Inc. (NASDAQ:AMBA – Get Rating) to report sales of $90.00 million for the current quarter, Zacks reports. Seven analysts have provided estimates for Ambarella’s earnings. The lowest sales estimate is $89.00 million and the highest is $91.01 million. Ambarella posted sales of $70.13 million during the same quarter last year, which would indicate a positive year over year growth rate of 28.3%. The business is scheduled to issue its next earnings report after the market closes on Monday, January 1st.

Ambarella (NASDAQ:AMBA – Get Rating) last posted its quarterly earnings results on Monday, February 28th. The semiconductor company reported ($0.29) earnings per share for the quarter, missing analysts’ consensus estimates of ($0.04) by ($0.25). Ambarella had a negative return on equity of 4.95% and a negative net margin of 7.96%. The company had revenue of $90.23 million for the quarter, compared to analyst estimates of $90.18 million. During the same period last year, the company earned ($0.39) earnings per share. The business’s revenue for the quarter was up 45.2% compared to the same quarter last year. 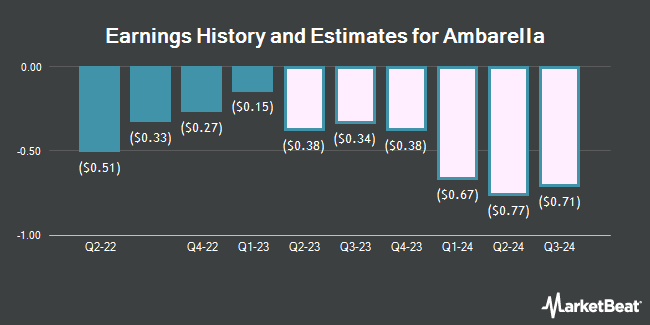