Beyond Meat, Inc. (NASDAQ:BYND – Get Rating) has received a consensus rating of “Hold” from the nineteen research firms that are currently covering the stock, MarketBeat.com reports. Six analysts have rated the stock with a sell rating and eight have assigned a hold rating to the company. The average 1-year price target among brokerages that have updated their coverage on the stock in the last year is $44.82.

Beyond Meat (NASDAQ:BYND – Get Rating) last posted its quarterly earnings results on Wednesday, May 11th. The company reported ($1.58) earnings per share for the quarter, missing the consensus estimate of ($1.01) by ($0.57). Beyond Meat had a negative net margin of 54.79% and a negative return on equity of 160.55%. During the same quarter in the prior year, the company posted ($0.42) EPS. On average, analysts forecast that Beyond Meat will post -4.07 earnings per share for the current year.

In other Beyond Meat news, Director Diane Carhart sold 5,048 shares of Beyond Meat stock in a transaction on Wednesday, April 13th. The shares were sold at an average price of $43.20, for a total value of $218,073.60. Following the transaction, the director now directly owns 1,540 shares of the company’s stock, valued at $66,528. The transaction was disclosed in a filing with the Securities & Exchange Commission, which is available through the SEC website. 7.90% of the stock is currently owned by insiders.

About Beyond Meat (Get Rating)

Beyond Meat, Inc manufactures, markets, and sells plant-based meat products in the United States and internationally. The company sells a range of plant-based meat products across the platforms of beef, pork, and poultry. It sells its products through grocery, mass merchandiser, club store, convenience store and natural retailer channels, and direct-to-consumer, as well as various food-away-from-home channels, including restaurants, foodservice outlets, and schools. 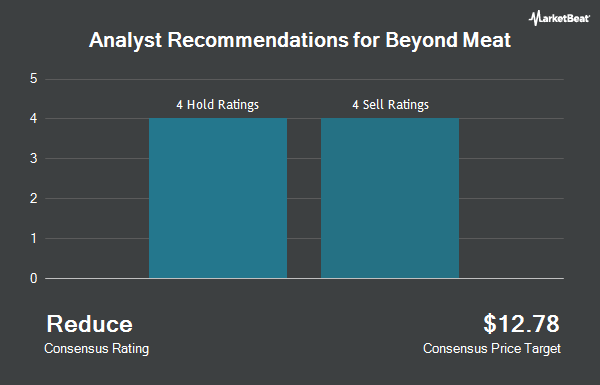 Daily Ratings & News for Beyond Meat

Complete the form below to receive the latest headlines and analysts' recommendations for Beyond Meat with our free daily email newsletter: