Wall Street brokerages predict that Kezar Life Sciences, Inc. (NASDAQ:KZR – Get Rating) will report earnings per share (EPS) of ($0.31) for the current fiscal quarter, according to Zacks. Zero analysts have provided estimates for Kezar Life Sciences’ earnings, with the lowest EPS estimate coming in at ($0.34) and the highest estimate coming in at ($0.28). Kezar Life Sciences reported earnings per share of ($0.25) during the same quarter last year, which indicates a negative year over year growth rate of 24%. The business is expected to issue its next earnings results on Monday, January 1st.

According to Zacks, analysts expect that Kezar Life Sciences will report full year earnings of ($1.22) per share for the current financial year, with EPS estimates ranging from ($1.43) to ($1.07). For the next financial year, analysts expect that the company will report earnings of ($1.23) per share, with EPS estimates ranging from ($1.45) to ($0.99). Zacks Investment Research’s earnings per share averages are an average based on a survey of sell-side analysts that that provide coverage for Kezar Life Sciences.

Kezar Life Sciences (NASDAQ:KZR – Get Rating) last issued its earnings results on Thursday, May 12th. The company reported ($0.26) earnings per share (EPS) for the quarter, topping analysts’ consensus estimates of ($0.28) by $0.02.

Kezar Life Sciences, Inc, a clinical-stage biotechnology company, engages in the discovery and development of novel small molecule therapeutics to treat unmet needs in immune-mediated diseases and cancer in the United States. The company's lead product candidate is KZR-616, a selective immunoproteasome inhibitor that is in Phase 2 clinical trials for various indications, including lupus nephritis, dermatomyositis, and polymyositis; and Phase 1b clinical trials in systemic lupus erythematosus and lupus nephritis. 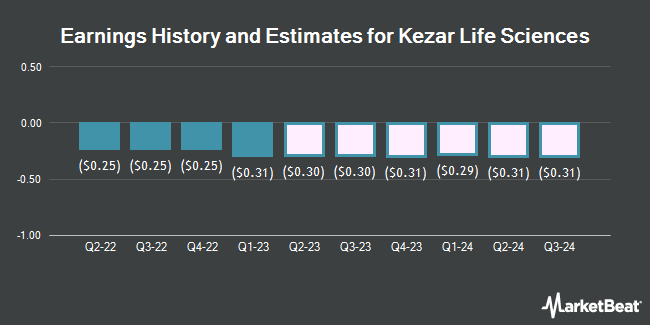 Complete the form below to receive the latest headlines and analysts' recommendations for Kezar Life Sciences with our free daily email newsletter: