Golden Entertainment, Inc. (NASDAQ:GDEN – Get Rating) has been assigned an average rating of “Buy” from the eight analysts that are presently covering the company, Marketbeat reports. One investment analyst has rated the stock with a hold rating and five have given a buy rating to the company. The average 1-year price objective among brokers that have issued ratings on the stock in the last year is $63.25.

Golden Entertainment (NASDAQ:GDEN – Get Rating) last issued its quarterly earnings results on Thursday, February 17th. The company reported $0.59 earnings per share (EPS) for the quarter, missing analysts’ consensus estimates of $0.66 by ($0.07). The business had revenue of $281.96 million for the quarter, compared to the consensus estimate of $264.84 million. Golden Entertainment had a net margin of 16.56% and a return on equity of 55.22%. During the same quarter last year, the business posted ($0.44) EPS. As a group, analysts predict that Golden Entertainment will post 3.73 earnings per share for the current year.

About Golden Entertainment (Get Rating)

Golden Entertainment, Inc, together with its subsidiaries, engages in the ownership and operation of a diversified entertainment platform in the United States. The company operates through four segments: Nevada Casino Resorts, Nevada Locals Casinos, Maryland Casino Resort, and Distributed Gaming. The Nevada Casino Resorts segment comprises of destination casino resort properties that include various food and beverage outlets, entertainment venues, and other amenities. 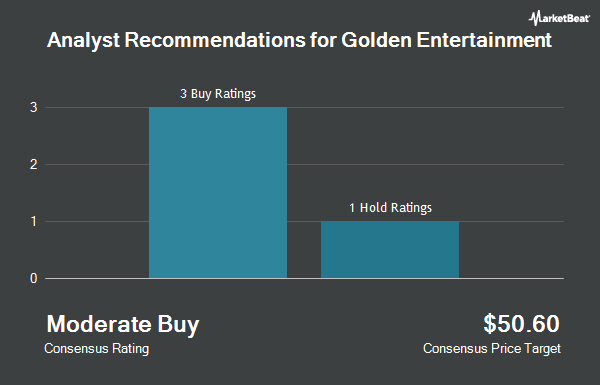 Complete the form below to receive the latest headlines and analysts' recommendations for Golden Entertainment with our free daily email newsletter: