Otis Worldwide (NYSE:OTIS – Get Rating) last released its quarterly earnings results on Monday, April 25th. The company reported $0.77 earnings per share (EPS) for the quarter, topping analysts’ consensus estimates of $0.74 by $0.03. Otis Worldwide had a negative return on equity of 35.81% and a net margin of 8.73%. The firm had revenue of $3.41 billion for the quarter, compared to the consensus estimate of $3.45 billion. During the same quarter last year, the business posted $0.72 EPS. The firm’s quarterly revenue was up .2% compared to the same quarter last year. As a group, equities research analysts forecast that Otis Worldwide will post 3.25 earnings per share for the current fiscal year.

About Otis Worldwide (Get Rating)

Otis Worldwide Corporation manufactures, installs, and services elevators and escalators in the United States, China, and internationally. The company operates in two segments, New Equipment and Service. The New Equipment segment designs, manufactures, sells, and installs a range of passenger and freight elevators, as well as escalators and moving walkways for residential and commercial buildings, and infrastructure projects. 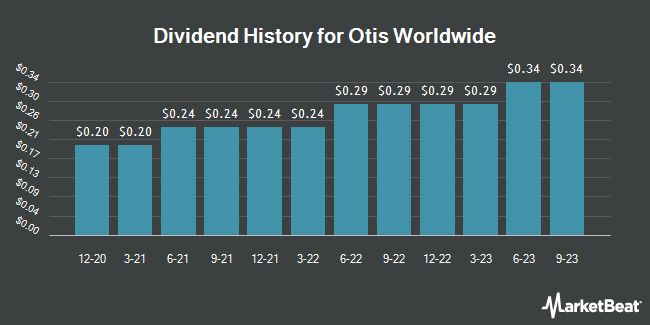 Complete the form below to receive the latest headlines and analysts' recommendations for Otis Worldwide with our free daily email newsletter: