Hecla Mining (NYSE:HL – Get Rating) was downgraded by Zacks Investment Research from a “hold” rating to a “strong sell” rating in a report issued on Tuesday, Zacks.com reports.

According to Zacks, “Hecla Mining Company is a leading low-cost U.S. silver producer with operating mines in Alaska and Idaho, and is a growing gold producer with an operating mine in Quebec, Canada. The Company also has exploration and pre-development properties in five world-class silver and gold mining districts in the U.S., Canada, and Mexico, and an exploration office and investments in early-stage silver exploration projects in Canada. “

Hecla Mining (NYSE:HL – Get Rating) last announced its quarterly earnings data on Tuesday, May 10th. The basic materials company reported $0.01 earnings per share for the quarter, missing the consensus estimate of $0.03 by ($0.02). The firm had revenue of $186.50 million during the quarter, compared to the consensus estimate of $186.09 million. Hecla Mining had a net margin of 2.02% and a return on equity of 2.76%. The firm’s quarterly revenue was down 11.6% compared to the same quarter last year. During the same period in the prior year, the firm earned $0.06 earnings per share. As a group, equities research analysts anticipate that Hecla Mining will post 0.09 earnings per share for the current year.

About Hecla Mining (Get Rating)

Hecla Mining Company, together with its subsidiaries, discovers, acquires, develops, and produces precious and base metal properties in the United States and internationally. The company mines for silver, gold, lead, and zinc concentrates, as well as carbon material containing silver and gold for sale to custom smelters, metal traders, and third-party processors,; and doré containing silver and gold. 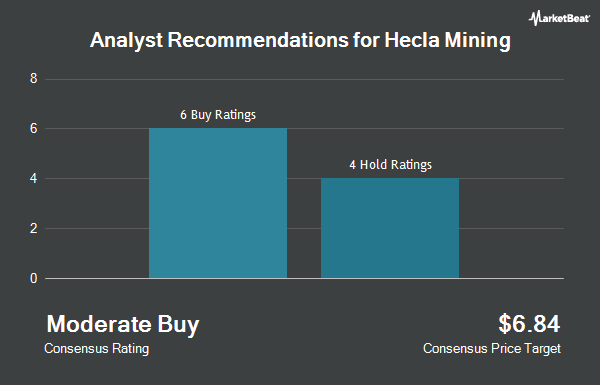 Complete the form below to receive the latest headlines and analysts' recommendations for Hecla Mining with our free daily email newsletter: