Zacks Investment Research upgraded shares of Ecovyst (NYSE:ECVT – Get Rating) from a sell rating to a hold rating in a research report released on Monday, Zacks.com reports.

According to Zacks, “Ecovyst Inc. businesses include Ecoservices and Catalyst Technologies. Ecovyst Inc., formerly known as PQ Group Holdings Inc., is based in MALVERN, Pa. “

Ecovyst (NYSE:ECVT – Get Rating) last released its quarterly earnings data on Thursday, April 28th. The company reported $0.15 EPS for the quarter, hitting the consensus estimate of $0.15. The company had revenue of $179.70 million for the quarter, compared to the consensus estimate of $175.46 million. Ecovyst had a positive return on equity of 9.78% and a negative net margin of 8.60%. Ecovyst’s quarterly revenue was up 41.9% on a year-over-year basis. During the same period last year, the business posted $0.04 EPS. On average, research analysts anticipate that Ecovyst will post 0.61 EPS for the current year.

In other Ecovyst news, Director Kevin Michael Fogarty acquired 40,000 shares of the stock in a transaction dated Thursday, May 5th. The stock was purchased at an average price of $9.85 per share, with a total value of $394,000.00. Following the transaction, the director now directly owns 40,000 shares of the company’s stock, valued at $394,000. The acquisition was disclosed in a filing with the SEC, which is accessible through this hyperlink. 3.23% of the stock is owned by company insiders.

Ecovyst Inc provides specialty catalysts and services in the United States, the Netherlands, the United Kingdom, and internationally. The company operates through two segments, Ecoservices and Catalyst Technologies. The Ecoservices segment offers sulfuric acid recycling services for production of alkylate for refineries; and virgin sulfuric acid for mining, water treatment, and industrial applications. 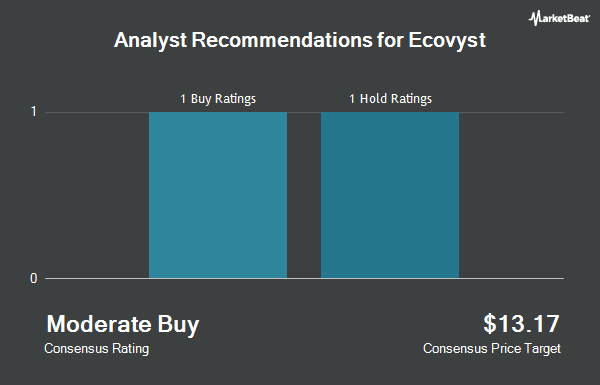 Receive News & Ratings for Ecovyst Daily - Enter your email address below to receive a concise daily summary of the latest news and analysts' ratings for Ecovyst and related companies with MarketBeat.com's FREE daily email newsletter.

Complete the form below to receive the latest headlines and analysts' recommendations for Ecovyst with our free daily email newsletter: