Wall Street analysts forecast that Expro Group Holdings (NYSE:XPRO – Get Rating) will report sales of $316.95 million for the current fiscal quarter, Zacks reports. Two analysts have issued estimates for Expro Group’s earnings, with estimates ranging from $308.90 million to $325.00 million. Expro Group reported sales of $107.84 million during the same quarter last year, which would suggest a positive year-over-year growth rate of 193.9%. The company is expected to issue its next earnings results on Monday, January 1st.

According to Zacks, analysts expect that Expro Group will report full year sales of $1.29 billion for the current fiscal year, with estimates ranging from $1.26 billion to $1.31 billion. For the next year, analysts expect that the business will report sales of $1.44 billion, with estimates ranging from $1.41 billion to $1.48 billion. Zacks’ sales calculations are a mean average based on a survey of research analysts that follow Expro Group.

Expro Group (NYSE:XPRO – Get Rating) last released its earnings results on Wednesday, March 2nd. The company reported ($0.03) earnings per share (EPS) for the quarter, topping analysts’ consensus estimates of ($0.16) by $0.13. Expro Group had a negative net margin of 16.28% and a negative return on equity of 1.95%. The business had revenue of $295.67 million during the quarter, compared to analyst estimates of $325.70 million.

XPRO has been the subject of a number of research reports. Zacks Investment Research lowered shares of Expro Group from a “buy” rating to a “hold” rating in a report on Wednesday, April 20th. Piper Sandler upped their target price on shares of Expro Group from $20.50 to $22.50 and gave the stock a “neutral” rating in a report on Monday, April 18th.

In related news, Director D. Keith Mosing sold 35,000 shares of the company’s stock in a transaction dated Tuesday, March 15th. The shares were sold at an average price of $16.00, for a total value of $560,000.00. The sale was disclosed in a document filed with the Securities & Exchange Commission, which is available at this link. Corporate insiders own 3.00% of the company’s stock.

About Expro Group (Get Rating)

Expro Group Holdings N.V. engages in the provision of energy services in North and Latin America, Europe and Sub-Saharan Africa, the Middle East and North Africa, and the Asia-Pacific. The company provides well construction services, such as technology solutions in drilling, tubular running services, and cementing and tubulars; and well management services, including well flow management, subsea well access, and well intervention and integrity services. 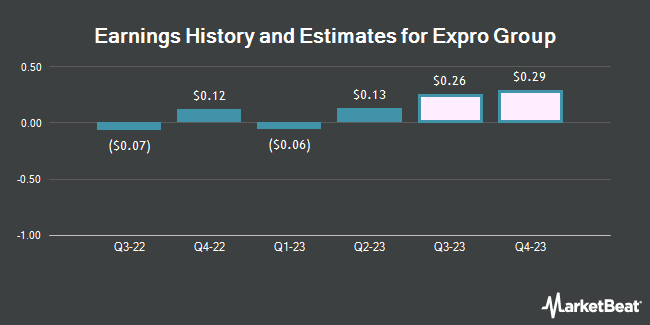 Complete the form below to receive the latest headlines and analysts' recommendations for Expro Group with our free daily email newsletter: