indie Semiconductor, Inc. (NASDAQ:INDI – Get Rating) COO Steven Machuga sold 17,562 shares of the business’s stock in a transaction dated Monday, May 16th. The stock was sold at an average price of $6.81, for a total transaction of $119,597.22. Following the sale, the chief operating officer now owns 155,938 shares in the company, valued at $1,061,937.78. The transaction was disclosed in a legal filing with the SEC, which is available at this link.

indie Semiconductor (NASDAQ:INDI – Get Rating) last released its quarterly earnings results on Tuesday, February 22nd. The company reported ($0.09) earnings per share (EPS) for the quarter, meeting analysts’ consensus estimates of ($0.09). indie Semiconductor had a negative net margin of 140.59% and a negative return on equity of 31.29%. The business had revenue of $18.96 million for the quarter, compared to analyst estimates of $18.24 million. On average, research analysts anticipate that indie Semiconductor, Inc. will post -0.46 EPS for the current fiscal year. 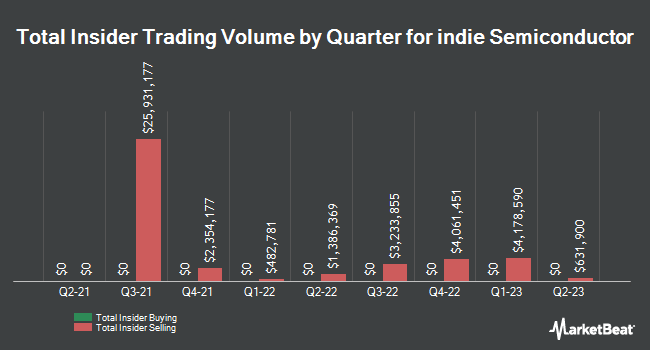