Caterpillar (NYSE:CAT – Get Rating)‘s stock had its “outperform” rating reaffirmed by stock analysts at Robert W. Baird in a note issued to investors on Thursday. They presently have a $280.00 price target on the industrial products company’s stock. Robert W. Baird’s target price would suggest a potential upside of 34.65% from the company’s previous close.

Caterpillar (NYSE:CAT – Get Rating) last posted its quarterly earnings results on Thursday, April 28th. The industrial products company reported $2.88 earnings per share for the quarter, beating analysts’ consensus estimates of $2.60 by $0.28. The company had revenue of $13.60 billion for the quarter, compared to analysts’ expectations of $13.49 billion. Caterpillar had a return on equity of 35.10% and a net margin of 12.33%. Caterpillar’s quarterly revenue was up 14.4% on a year-over-year basis. During the same period last year, the firm earned $2.87 earnings per share. Research analysts forecast that Caterpillar will post 12.58 earnings per share for the current year.

In other news, Director David Maclennan purchased 600 shares of the firm’s stock in a transaction dated Thursday, May 5th. The shares were acquired at an average price of $219.82 per share, with a total value of $131,892.00. Following the purchase, the director now directly owns 2,480 shares of the company’s stock, valued at $545,153.60. The purchase was disclosed in a filing with the SEC, which is accessible through this hyperlink. Also, insider Joseph E. Creed sold 5,004 shares of the company’s stock in a transaction that occurred on Wednesday, April 20th. The shares were sold at an average price of $235.00, for a total value of $1,175,940.00. Following the completion of the sale, the insider now directly owns 2,757 shares in the company, valued at approximately $647,895. The disclosure for this sale can be found here. Insiders sold a total of 49,176 shares of company stock worth $10,951,020 in the last ninety days. 0.18% of the stock is owned by corporate insiders.

About Caterpillar (Get Rating) 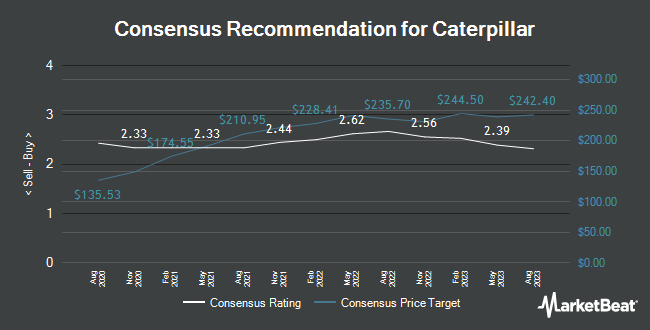