Lowe’s Companies (NYSE:LOW – Get Rating) had its target price raised by equities researchers at JPMorgan Chase & Co. from $228.00 to $230.00 in a research note issued to investors on Thursday, Briefing.com reports. The firm presently has a “neutral” rating on the home improvement retailer’s stock. JPMorgan Chase & Co.‘s target price suggests a potential upside of 22.07% from the stock’s current price.

Lowe’s Companies (NYSE:LOW – Get Rating) last posted its quarterly earnings results on Wednesday, May 18th. The home improvement retailer reported $3.51 earnings per share (EPS) for the quarter, beating the consensus estimate of $3.22 by $0.29. Lowe’s Companies had a net margin of 8.77% and a negative return on equity of 551.52%. The business had revenue of $23.66 billion during the quarter, compared to analyst estimates of $23.72 billion. During the same period in the prior year, the business posted $3.21 earnings per share. The company’s revenue was down 3.1% on a year-over-year basis. On average, sell-side analysts anticipate that Lowe’s Companies will post 13.36 earnings per share for the current year. 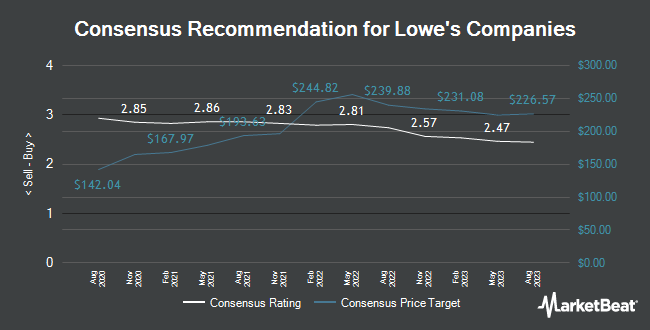