VICI Properties (NYSE:VICI – Get Rating) had its price objective boosted by analysts at The Goldman Sachs Group from $35.00 to $39.00 in a research report issued on Thursday, Stock Target Advisor reports. The brokerage currently has a “buy” rating on the stock. The Goldman Sachs Group’s target price indicates a potential upside of 33.61% from the stock’s previous close.

In related news, Director Michael D. Rumbolz acquired 2,000 shares of VICI Properties stock in a transaction on Tuesday, March 8th. The shares were purchased at an average cost of $26.88 per share, for a total transaction of $53,760.00. The purchase was disclosed in a filing with the SEC, which is available through this hyperlink. Corporate insiders own 0.22% of the company’s stock.

About VICI Properties (Get Rating) 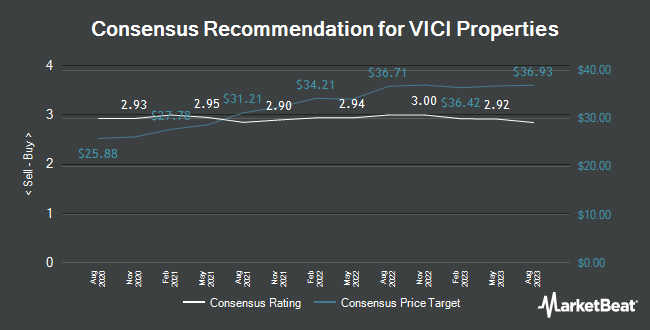