Wall Street analysts expect El Pollo Loco Holdings, Inc. (NASDAQ:LOCO – Get Rating) to announce sales of $126.86 million for the current quarter, Zacks reports. Three analysts have issued estimates for El Pollo Loco’s earnings, with the highest sales estimate coming in at $129.70 million and the lowest estimate coming in at $125.09 million. El Pollo Loco reported sales of $121.99 million during the same quarter last year, which would suggest a positive year over year growth rate of 4%. The company is expected to announce its next earnings results on Monday, January 1st.

According to Zacks, analysts expect that El Pollo Loco will report full-year sales of $474.90 million for the current financial year, with estimates ranging from $471.60 million to $481.36 million. For the next financial year, analysts expect that the business will report sales of $504.91 million, with estimates ranging from $491.80 million to $519.84 million. Zacks’ sales calculations are a mean average based on a survey of sell-side research firms that cover El Pollo Loco.

El Pollo Loco (NASDAQ:LOCO – Get Rating) last posted its earnings results on Friday, May 6th. The restaurant operator reported $0.07 earnings per share (EPS) for the quarter, meeting analysts’ consensus estimates of $0.07. The firm had revenue of $110.05 million during the quarter, compared to analyst estimates of $106.69 million. El Pollo Loco had a net margin of 5.97% and a return on equity of 9.62%. El Pollo Loco’s revenue was up 2.2% on a year-over-year basis. During the same period in the previous year, the business posted $0.13 EPS.

LOCO has been the subject of a number of research analyst reports. StockNews.com lowered shares of El Pollo Loco from a “buy” rating to a “hold” rating in a research note on Sunday, May 15th. Zacks Investment Research downgraded shares of El Pollo Loco from a “hold” rating to a “sell” rating in a report on Friday, May 6th. One research analyst has rated the stock with a sell rating, two have assigned a hold rating and one has issued a buy rating to the stock. Based on data from MarketBeat, El Pollo Loco currently has a consensus rating of “Hold” and an average target price of $20.67. 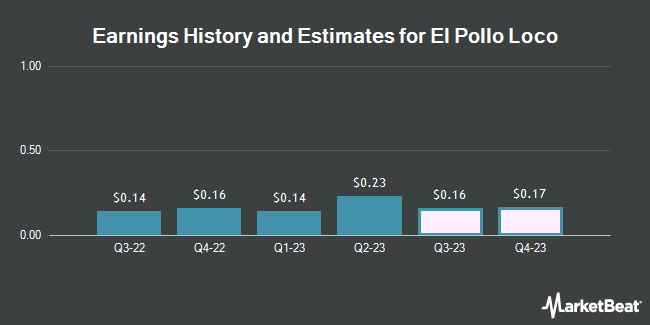