$524.99 Million in Sales Expected for Kennametal Inc. (NYSE:KMT) This Quarter

Brokerages predict that Kennametal Inc. (NYSE:KMT – Get Rating) will report sales of $524.99 million for the current quarter, Zacks reports. Three analysts have made estimates for Kennametal’s earnings. The highest sales estimate is $527.70 million and the lowest is $521.26 million. Kennametal reported sales of $515.97 million during the same quarter last year, which would suggest a positive year over year growth rate of 1.7%. The company is scheduled to announce its next earnings results on Monday, January 1st.

On average, analysts expect that Kennametal will report full-year sales of $2.01 billion for the current fiscal year, with estimates ranging from $2.00 billion to $2.01 billion. For the next financial year, analysts forecast that the firm will report sales of $2.12 billion, with estimates ranging from $2.10 billion to $2.14 billion. Zacks Investment Research’s sales averages are an average based on a survey of research firms that cover Kennametal.

Kennametal (NYSE:KMT – Get Rating) last posted its quarterly earnings data on Monday, May 2nd. The industrial products company reported $0.47 EPS for the quarter, beating the consensus estimate of $0.42 by $0.05. Kennametal had a return on equity of 11.05% and a net margin of 6.91%. During the same period in the prior year, the company posted $0.32 earnings per share.

In related news, Director Joseph Alvarado purchased 1,000 shares of the company’s stock in a transaction dated Monday, March 14th. The shares were acquired at an average cost of $29.05 per share, for a total transaction of $29,050.00. The acquisition was disclosed in a filing with the SEC, which is available at the SEC website. Also, Director William M. Lambert bought 36,698 shares of the stock in a transaction that occurred on Wednesday, May 4th. The stock was acquired at an average price of $26.23 per share, for a total transaction of $962,588.54. Following the completion of the transaction, the director now owns 52,360 shares in the company, valued at $1,373,402.80. The disclosure for this purchase can be found here. Corporate insiders own 1.47% of the company’s stock.

The firm also recently declared a quarterly dividend, which will be paid on Tuesday, May 24th. Investors of record on Tuesday, May 10th will be issued a $0.20 dividend. This represents a $0.80 dividend on an annualized basis and a yield of 3.06%. The ex-dividend date is Monday, May 9th. Kennametal’s dividend payout ratio is currently 49.08%.

About Kennametal (Get Rating) 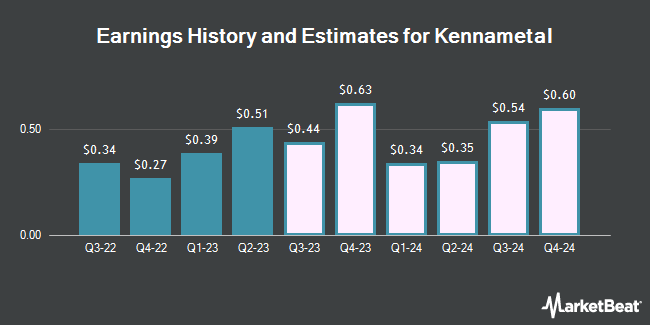