Equities research analysts expect Asana, Inc. (NYSE:ASAN – Get Rating) to post sales of $115.09 million for the current fiscal quarter, Zacks Investment Research reports. Four analysts have provided estimates for Asana’s earnings. The highest sales estimate is $115.24 million and the lowest is $115.00 million. Asana posted sales of $76.67 million during the same quarter last year, which would indicate a positive year-over-year growth rate of 50.1%. The firm is scheduled to announce its next earnings report after the market closes on Monday, January 1st.

On average, analysts expect that Asana will report full year sales of $529.67 million for the current year, with estimates ranging from $528.80 million to $530.33 million. For the next financial year, analysts anticipate that the business will report sales of $709.09 million, with estimates ranging from $683.30 million to $745.73 million. Zacks Investment Research’s sales averages are an average based on a survey of research firms that cover Asana.

Asana (NYSE:ASAN – Get Rating) last posted its quarterly earnings data on Wednesday, March 9th. The company reported ($0.48) earnings per share for the quarter, missing analysts’ consensus estimates of ($0.43) by ($0.05). Asana had a negative return on equity of 158.77% and a negative net margin of 76.19%. The company had revenue of $111.95 million for the quarter, compared to analyst estimates of $105.18 million. During the same period in the previous year, the business posted ($0.32) earnings per share. The firm’s revenue was up 63.7% compared to the same quarter last year.

In other Asana news, insider Eleanor B. Lacey sold 1,359 shares of the company’s stock in a transaction that occurred on Wednesday, March 16th. The stock was sold at an average price of $34.64, for a total value of $47,075.76. The transaction was disclosed in a filing with the Securities & Exchange Commission, which can be accessed through the SEC website. Also, CEO Dustin A. Moskovitz bought 500,000 shares of the business’s stock in a transaction on Thursday, February 24th. The stock was purchased at an average price of $49.36 per share, with a total value of $24,680,000.00. The disclosure for this purchase can be found here. Over the last quarter, insiders have sold 38,026 shares of company stock valued at $1,871,164. Insiders own 54.43% of the company’s stock.

Asana, Inc, together with its subsidiaries, operates a work management platform for individuals, team leads, and executives in the United States and internationally. The company's platform enables teams to orchestrate work from daily tasks to cross-functional strategic initiatives; and manages product launches, marketing campaigns, and organization-wide goal settings. 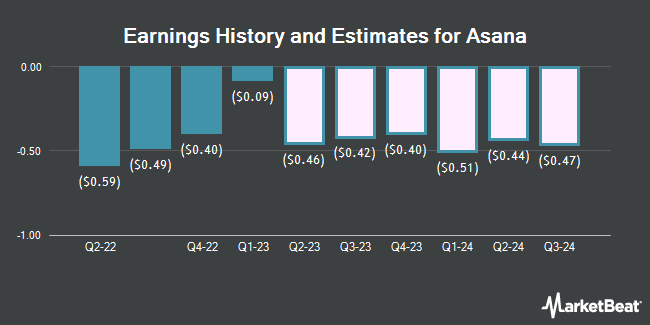 Receive News & Ratings for Asana Daily - Enter your email address below to receive a concise daily summary of the latest news and analysts' ratings for Asana and related companies with MarketBeat.com's FREE daily email newsletter.

Complete the form below to receive the latest headlines and analysts' recommendations for Asana with our free daily email newsletter: