American Eagle Outfitters (NYSE:AEO – Get Rating) last issued its earnings results on Wednesday, March 2nd. The apparel retailer reported $0.35 EPS for the quarter, meeting the consensus estimate of $0.35. The firm had revenue of $1.51 billion during the quarter, compared to the consensus estimate of $1.51 billion. American Eagle Outfitters had a net margin of 8.37% and a return on equity of 34.33%. The business’s quarterly revenue was up 16.7% on a year-over-year basis. During the same quarter in the prior year, the firm earned $0.39 earnings per share.

The firm also recently disclosed a quarterly dividend, which was paid on Thursday, March 24th. Shareholders of record on Friday, March 11th were given a $0.18 dividend. This represents a $0.72 annualized dividend and a yield of 5.36%. The ex-dividend date was Thursday, March 10th. American Eagle Outfitters’s dividend payout ratio (DPR) is presently 35.47%.

American Eagle Outfitters, Inc operates as a specialty retailer that provides clothing, accessories, and personal care products under the American Eagle and Aerie brands. The company provides jeans, and specialty apparel and accessories for women and men; and intimates, apparel, activewear, and swim collections, as well as personal care products for women. 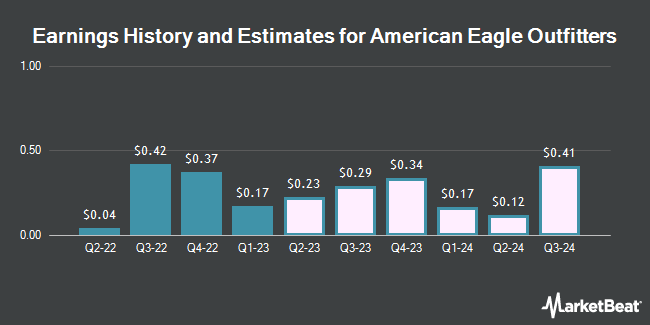 Reata Pharmaceuticals Shares Gap Up to $30.39

Complete the form below to receive the latest headlines and analysts' recommendations for American Eagle Outfitters with our free daily email newsletter: