Humanigen, Inc. (NASDAQ:HGEN – Get Rating) insider Dale Chappell purchased 173,700 shares of the firm’s stock in a transaction that occurred on Wednesday, May 18th. The shares were acquired at an average cost of $1.96 per share, with a total value of $340,452.00. Following the completion of the transaction, the insider now directly owns 8,066,575 shares of the company’s stock, valued at approximately $15,810,487. The purchase was disclosed in a legal filing with the SEC, which can be accessed through this link.

Humanigen (NASDAQ:HGEN – Get Rating) last announced its quarterly earnings data on Thursday, May 5th. The company reported ($0.32) earnings per share (EPS) for the quarter, beating analysts’ consensus estimates of ($0.49) by $0.17. The business had revenue of $1.04 million for the quarter, compared to analysts’ expectations of $1.04 million. Humanigen had a negative return on equity of 24,421.51% and a negative net margin of 4,640.77%. As a group, research analysts predict that Humanigen, Inc. will post -0.69 earnings per share for the current year.

Separately, Zacks Investment Research lowered shares of Humanigen from a “hold” rating to a “sell” rating in a research report on Wednesday, May 4th. Two research analysts have rated the stock with a sell rating, two have assigned a hold rating and four have given a buy rating to the company. According to data from MarketBeat, the stock currently has an average rating of “Hold” and a consensus target price of $21.00.

Humanigen, Inc, a clinical stage biopharmaceutical company, develops a portfolio of anti-inflammatory immunology and immuno-oncology monoclonal antibodies in the United States. The company's lead product candidate is Lenzilumab, a monoclonal antibody that targets and neutralizes human granulocyte-macrophage colony-stimulating factor, which has completed Phase III clinical trial for the treatment of cytokine storm associated with COVID-19; and Phase Ib/II clinical trial as a sequenced therapy in combination with CD19 targeted chimeric antigen receptor T-cell therapies to treat patients with relapsed or refractory B-cell lymphoma, as well as that is in Phase II clinical trial in patients with chronic myelomonocytic leukemia. 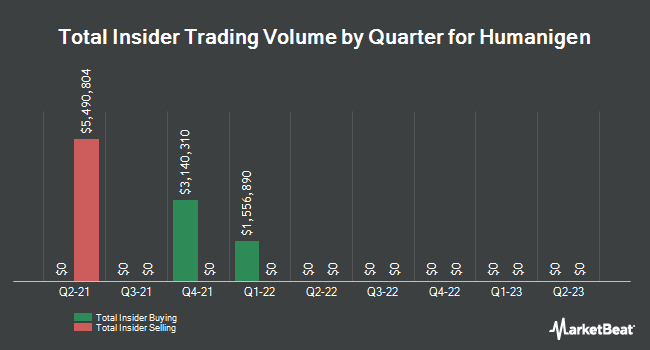 Complete the form below to receive the latest headlines and analysts' recommendations for Humanigen with our free daily email newsletter: