Equities analysts expect Skechers U.S.A., Inc. (NYSE:SKX – Get Rating) to post sales of $1.79 billion for the current fiscal quarter, Zacks Investment Research reports. Five analysts have made estimates for Skechers U.S.A.’s earnings, with the lowest sales estimate coming in at $1.77 billion and the highest estimate coming in at $1.82 billion. Skechers U.S.A. reported sales of $1.66 billion during the same quarter last year, which would suggest a positive year over year growth rate of 7.8%. The firm is scheduled to report its next earnings report on Monday, January 1st.

On average, analysts expect that Skechers U.S.A. will report full year sales of $7.31 billion for the current year, with estimates ranging from $7.27 billion to $7.37 billion. For the next year, analysts expect that the company will post sales of $8.08 billion, with estimates ranging from $7.86 billion to $8.31 billion. Zacks Investment Research’s sales averages are a mean average based on a survey of sell-side research firms that cover Skechers U.S.A..

In other Skechers U.S.A. news, President Michael Greenberg purchased 28,000 shares of the firm’s stock in a transaction that occurred on Monday, March 7th. The stock was purchased at an average price of $35.20 per share, for a total transaction of $985,600.00. The acquisition was disclosed in a filing with the SEC, which is available through the SEC website. Also, General Counsel Phillip Paccione sold 11,696 shares of the stock in a transaction on Wednesday, March 2nd. The stock was sold at an average price of $43.30, for a total transaction of $506,436.80. The disclosure for this sale can be found here. Insiders have sold a total of 153,501 shares of company stock worth $6,646,593 in the last three months. Corporate insiders own 24.44% of the company’s stock.

Get a free copy of the Zacks research report on Skechers U.S.A. (SKX) 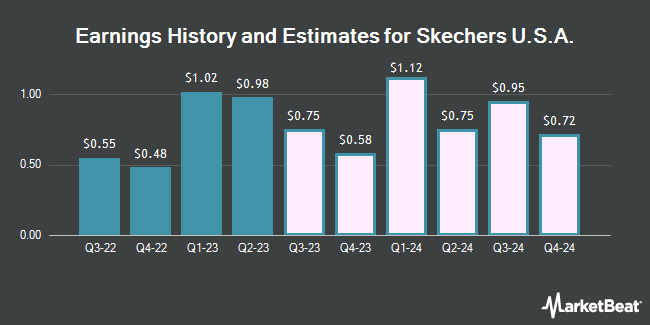