Brokerages predict that Nevro Corp. (NYSE:NVRO – Get Rating) will report $104.45 million in sales for the current fiscal quarter, according to Zacks. Six analysts have provided estimates for Nevro’s earnings, with estimates ranging from $103.40 million to $105.10 million. Nevro posted sales of $102.33 million during the same quarter last year, which would indicate a positive year-over-year growth rate of 2.1%. The business is expected to announce its next earnings results on Monday, January 1st.

On average, analysts expect that Nevro will report full year sales of $423.43 million for the current year, with estimates ranging from $421.44 million to $426.58 million. For the next fiscal year, analysts anticipate that the business will report sales of $481.70 million, with estimates ranging from $470.49 million to $493.80 million. Zacks Investment Research’s sales averages are a mean average based on a survey of research firms that follow Nevro.

Nevro (NYSE:NVRO – Get Rating) last posted its quarterly earnings data on Wednesday, May 4th. The medical equipment provider reported ($0.98) EPS for the quarter, beating analysts’ consensus estimates of ($1.11) by $0.13. The company had revenue of $87.40 million for the quarter, compared to analyst estimates of $86.19 million. Nevro had a negative net margin of 35.25% and a negative return on equity of 38.02%. Nevro’s quarterly revenue was down 1.4% on a year-over-year basis. During the same period in the previous year, the business posted ($0.85) earnings per share.

In other Nevro news, CEO D Keith Grossman purchased 3,200 shares of Nevro stock in a transaction on Tuesday, March 8th. The shares were bought at an average price of $63.59 per share, with a total value of $203,488.00. The transaction was disclosed in a filing with the Securities & Exchange Commission, which is available through this link. Also, General Counsel Kashif Rashid purchased 1,500 shares of Nevro stock in a transaction on Friday, March 11th. The stock was acquired at an average cost of $64.04 per share, for a total transaction of $96,060.00. The disclosure for this purchase can be found here. In the last three months, insiders have purchased 6,950 shares of company stock worth $399,673. 2.80% of the stock is owned by insiders. 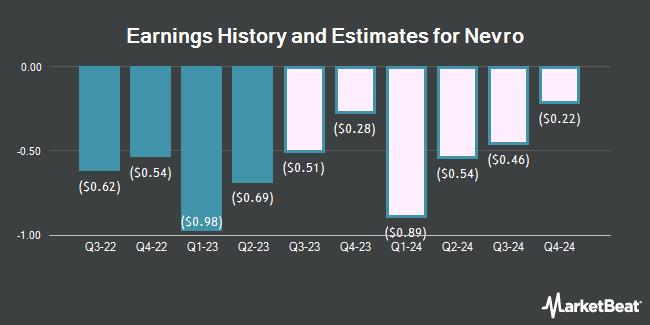