$6.67 Billion in Sales Expected for Freeport-McMoRan Inc. (NYSE:FCX) This Quarter

Wall Street brokerages predict that Freeport-McMoRan Inc. (NYSE:FCX – Get Rating) will post sales of $6.67 billion for the current quarter, Zacks Investment Research reports. Thirteen analysts have made estimates for Freeport-McMoRan’s earnings. The highest sales estimate is $8.13 billion and the lowest is $5.91 billion. Freeport-McMoRan reported sales of $5.75 billion in the same quarter last year, which would indicate a positive year over year growth rate of 16%. The firm is expected to report its next earnings report on Monday, January 1st.

According to Zacks, analysts expect that Freeport-McMoRan will report full year sales of $26.59 billion for the current financial year, with estimates ranging from $22.70 billion to $31.26 billion. For the next year, analysts anticipate that the firm will report sales of $25.73 billion, with estimates ranging from $19.84 billion to $29.36 billion. Zacks Investment Research’s sales averages are an average based on a survey of sell-side research firms that that provide coverage for Freeport-McMoRan.

Freeport-McMoRan (NYSE:FCX – Get Rating) last released its quarterly earnings data on Thursday, April 21st. The natural resource company reported $1.07 EPS for the quarter, beating the consensus estimate of $0.88 by $0.19. The company had revenue of $6.60 billion for the quarter, compared to analyst estimates of $6.29 billion. Freeport-McMoRan had a return on equity of 24.06% and a net margin of 20.79%. The firm’s revenue was up 36.1% compared to the same quarter last year. During the same period last year, the company posted $0.51 earnings per share.

In other Freeport-McMoRan news, Director Hugh Grant purchased 12,300 shares of the firm’s stock in a transaction on Monday, April 25th. The stock was bought at an average cost of $40.75 per share, for a total transaction of $501,225.00. Following the completion of the purchase, the director now owns 15,776 shares in the company, valued at approximately $642,872. The purchase was disclosed in a legal filing with the Securities & Exchange Commission, which is available through the SEC website. 0.72% of the stock is currently owned by corporate insiders.

The business also recently declared a quarterly dividend, which was paid on Monday, May 2nd. Investors of record on Thursday, April 14th were issued a dividend of $0.15 per share. The ex-dividend date was Wednesday, April 13th. This represents a $0.60 annualized dividend and a yield of 1.65%. Freeport-McMoRan’s payout ratio is presently 8.70%.

About Freeport-McMoRan (Get Rating) 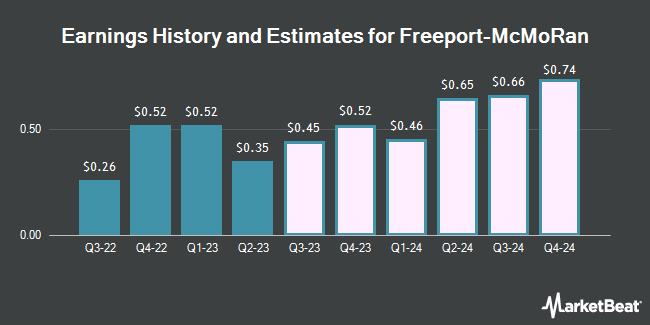