Altria Group, Inc. (NYSE:MO – Get Rating) announced a quarterly dividend on Thursday, May 19th, Zacks reports. Investors of record on Wednesday, June 15th will be paid a dividend of 0.90 per share on Monday, July 11th. This represents a $3.60 dividend on an annualized basis and a dividend yield of 7.05%. The ex-dividend date is Tuesday, June 14th.

Altria Group (NYSE:MO – Get Rating) last announced its quarterly earnings data on Thursday, April 28th. The company reported $1.12 earnings per share for the quarter, beating analysts’ consensus estimates of $1.09 by $0.03. Altria Group had a net margin of 11.64% and a negative return on equity of 2,506.92%. The business had revenue of $4.82 billion during the quarter, compared to the consensus estimate of $4.88 billion. During the same quarter in the prior year, the firm earned $1.07 EPS. The company’s revenue for the quarter was down 1.2% compared to the same quarter last year. As a group, analysts expect that Altria Group will post 4.84 earnings per share for the current fiscal year.

Altria Group, Inc, through its subsidiaries, manufactures and sells smokeable and oral tobacco products in the United States. The company provides cigarettes primarily under the Marlboro brand; cigars and pipe tobacco principally under the Black & Mild brand; and moist smokeless tobacco products under the Copenhagen, Skoal, Red Seal, and Husky brands, as well as provides on! oral nicotine pouches. 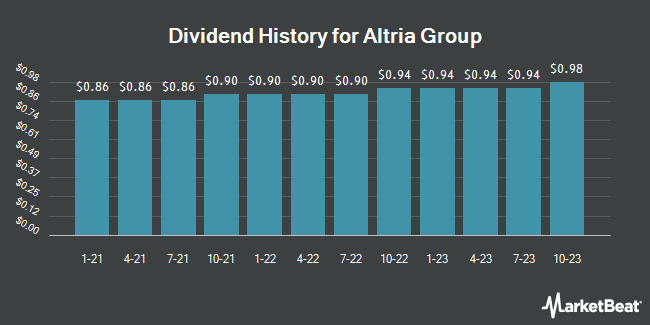 Complete the form below to receive the latest headlines and analysts' recommendations for Altria Group with our free daily email newsletter: