Apartment Income REIT Corp. (NYSE:AIRC – Get Rating) has received an average recommendation of “Hold” from the eight ratings firms that are currently covering the company, MarketBeat reports. One equities research analyst has rated the stock with a sell rating, two have assigned a hold rating and three have given a buy rating to the company. The average twelve-month price objective among brokerages that have issued ratings on the stock in the last year is $57.33.

Apartment Income REIT (NYSE:AIRC – Get Rating) last released its quarterly earnings results on Monday, May 2nd. The company reported ($0.23) earnings per share for the quarter, missing the consensus estimate of $0.56 by ($0.79). Apartment Income REIT had a return on equity of 40.71% and a net margin of 99.27%. During the same period in the prior year, the firm earned $0.50 EPS. As a group, equities analysts forecast that Apartment Income REIT will post 2.43 EPS for the current year.

The firm also recently declared a quarterly dividend, which will be paid on Tuesday, May 31st. Shareholders of record on Friday, May 20th will be issued a dividend of $0.45 per share. This represents a $1.80 dividend on an annualized basis and a dividend yield of 4.17%. The ex-dividend date of this dividend is Thursday, May 19th. Apartment Income REIT’s payout ratio is 38.30%.

About Apartment Income REIT (Get Rating)

AIR is a real estate investment trust focused on the ownership and management of quality apartment communities located in the largest markets in the United States. AIR is one of the country's largest owners and operators of apartments, with 99 communities in 12 states and the District of Columbia. 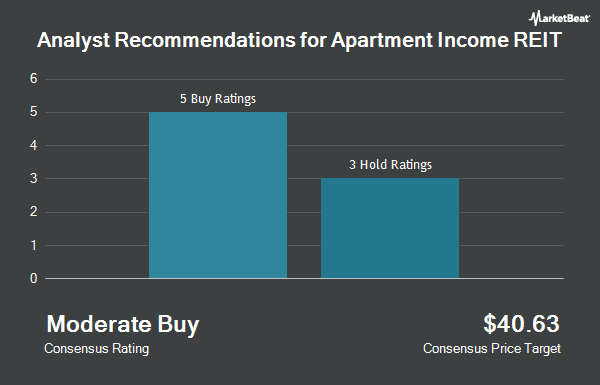 Complete the form below to receive the latest headlines and analysts' recommendations for Apartment Income REIT with our free daily email newsletter: