Dorian LPG (NYSE:LPG – Get Rating) will be announcing its earnings results before the market opens on Thursday, May 26th.

The business also recently announced a Variable dividend, which will be paid on Thursday, June 2nd. Investors of record on Monday, May 16th will be issued a $2.50 dividend. The ex-dividend date is Friday, May 13th. Dorian LPG’s dividend payout ratio (DPR) is currently 245.90%.

Separately, StockNews.com started coverage on Dorian LPG in a report on Thursday, March 31st. They issued a “hold” rating for the company.

Dorian LPG Ltd., together with its subsidiaries, engages in the transportation of liquefied petroleum gas (LPG) through its LPG tankers worldwide. The company owns and operates very large gas carriers (VLGCs). As of May 19, 2021, its fleet consisted of twenty-three VLGCs. The company was incorporated in 2013 and is headquartered in Stamford, Connecticut. 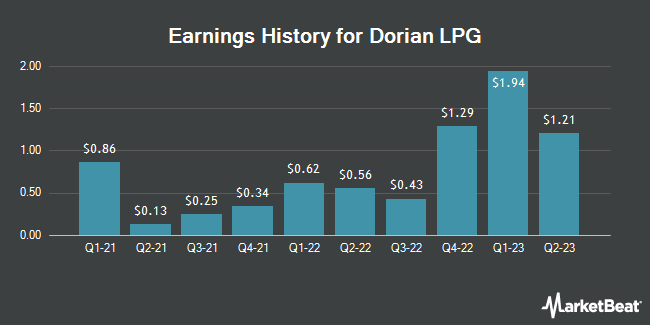 Complete the form below to receive the latest headlines and analysts' recommendations for Dorian LPG with our free daily email newsletter: