Franklin Resources, Inc. (NYSE:BEN – Get Rating) has been given a consensus rating of “Hold” by the eight analysts that are presently covering the stock, Marketbeat Ratings reports. One analyst has rated the stock with a sell rating and six have assigned a hold rating to the company. The average twelve-month target price among brokerages that have issued ratings on the stock in the last year is $31.57.

The firm also recently announced a quarterly dividend, which was paid on Thursday, April 14th. Stockholders of record on Thursday, March 31st were given a dividend of $0.29 per share. This represents a $1.16 annualized dividend and a dividend yield of 4.50%. The ex-dividend date was Wednesday, March 30th. Franklin Resources’s payout ratio is presently 31.18%.

In other news, insider Franklin Resources Inc acquired 998,370 shares of Franklin Resources stock in a transaction on Friday, April 1st. The stock was acquired at an average cost of $12.27 per share, with a total value of $12,249,999.90. Following the transaction, the insider now owns 14,079,687 shares of the company’s stock, valued at approximately $172,757,759.49. The transaction was disclosed in a filing with the Securities & Exchange Commission, which is available through the SEC website. Insiders own 23.30% of the company’s stock. 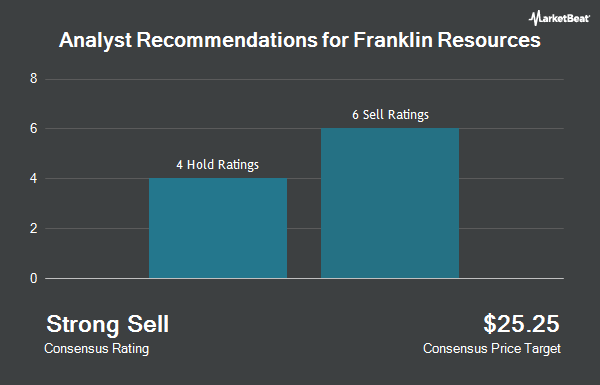