Superior Group of Companies, Inc. (NASDAQ:SGC – Get Rating) announced a quarterly dividend on Friday, May 13th, Fidelity reports. Investors of record on Tuesday, May 24th will be given a dividend of 0.14 per share by the textile maker on Tuesday, June 7th. This represents a $0.56 annualized dividend and a dividend yield of 3.25%. The ex-dividend date of this dividend is Monday, May 23rd. This is a positive change from Superior Group of Companies’s previous quarterly dividend of $0.12.

In other news, CEO Michael Benstock acquired 2,146 shares of the stock in a transaction on Wednesday, May 11th. The stock was bought at an average price of $15.13 per share, with a total value of $32,468.98. Following the completion of the transaction, the chief executive officer now directly owns 695,771 shares of the company’s stock, valued at $10,527,015.23. The transaction was disclosed in a document filed with the Securities & Exchange Commission, which is accessible through this hyperlink. Insiders acquired 11,004 shares of company stock valued at $169,341 in the last ninety days. 28.30% of the stock is owned by corporate insiders.

About Superior Group of Companies (Get Rating) 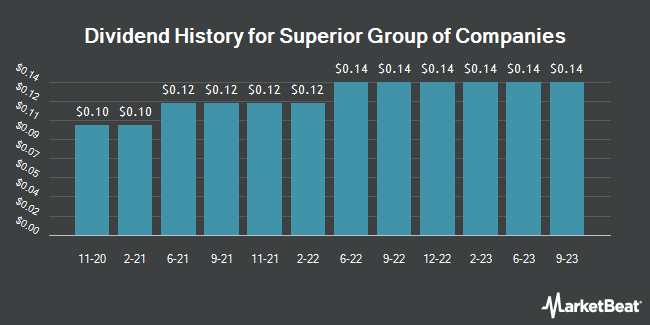 Complete the form below to receive the latest headlines and analysts' recommendations for Superior Group of Companies with our free daily email newsletter: