The Mosaic Company (NYSE:MOS) to Issue Quarterly Dividend of $0.15

Mosaic (NYSE:MOS – Get Rating) last released its quarterly earnings results on Monday, May 2nd. The basic materials company reported $2.41 EPS for the quarter, beating analysts’ consensus estimates of $2.40 by $0.01. Mosaic had a return on equity of 23.80% and a net margin of 18.99%. During the same period in the previous year, the firm earned $0.57 earnings per share. As a group, research analysts anticipate that Mosaic will post 13.5 earnings per share for the current year.

Mosaic declared that its Board of Directors has approved a share buyback program on Tuesday, February 22nd that authorizes the company to buyback $1.00 billion in outstanding shares. This buyback authorization authorizes the basic materials company to reacquire up to 6% of its stock through open market purchases. Stock buyback programs are typically an indication that the company’s board believes its stock is undervalued.

Several research firms recently issued reports on MOS. Piper Sandler boosted their price objective on Mosaic from $57.00 to $80.00 and gave the company an “overweight” rating in a report on Monday, March 7th. The Goldman Sachs Group raised Mosaic from a “neutral” rating to a “buy” rating and set a $83.00 target price for the company in a research note on Tuesday, March 15th. Mizuho upped their price target on Mosaic from $59.00 to $89.00 in a report on Friday, April 29th. Exane BNP Paribas cut Mosaic from an “outperform” rating to a “neutral” rating and set a $82.00 price objective on the stock. in a report on Wednesday, April 20th. Finally, Citigroup increased their target price on Mosaic from $49.00 to $74.00 and gave the stock a “neutral” rating in a research report on Tuesday, March 22nd. Nine investment analysts have rated the stock with a hold rating and eight have assigned a buy rating to the company’s stock. According to data from MarketBeat, Mosaic presently has a consensus rating of “Hold” and a consensus price target of $64.59. 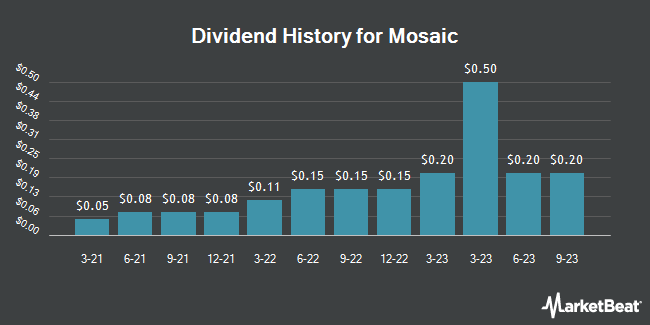