Wall Street brokerages expect Infinity Pharmaceuticals, Inc. (NASDAQ:INFI – Get Rating) to post $520,000.00 in sales for the current fiscal quarter, according to Zacks. Three analysts have provided estimates for Infinity Pharmaceuticals’ earnings. The highest sales estimate is $680,000.00 and the lowest is $200,000.00. Infinity Pharmaceuticals posted sales of $510,000.00 during the same quarter last year, which would indicate a positive year-over-year growth rate of 2%. The business is expected to announce its next quarterly earnings results on Monday, January 1st.

On average, analysts expect that Infinity Pharmaceuticals will report full-year sales of $2.05 million for the current year, with estimates ranging from $800,000.00 to $2.70 million. For the next financial year, analysts expect that the company will post sales of $2.17 million, with estimates ranging from $800,000.00 to $3.00 million. Zacks’ sales calculations are a mean average based on a survey of analysts that cover Infinity Pharmaceuticals.

Infinity Pharmaceuticals (NASDAQ:INFI – Get Rating) last released its quarterly earnings results on Tuesday, May 3rd. The biotechnology company reported ($0.14) EPS for the quarter, hitting the consensus estimate of ($0.14). The company had revenue of $0.65 million for the quarter, compared to analyst estimates of $0.40 million. Infinity Pharmaceuticals had a negative return on equity of 175.11% and a negative net margin of 2,254.97%. During the same quarter in the previous year, the company posted ($0.15) earnings per share.

Infinity Pharmaceuticals, Inc, a biopharmaceutical company, focuses on developing novel medicines for people with cancer. Its product candidate is IPI-549, an orally administered clinical-stage immuno-oncology product candidate that inhibits the enzyme phosphoinositide-3-kinase-gamma, which is in Phase 2 clinical trials for the treatment of metastatic triple negative breast cancer and urothelial cancer; and Phase 1/1b clinical trials for the treatment of solid tumors. 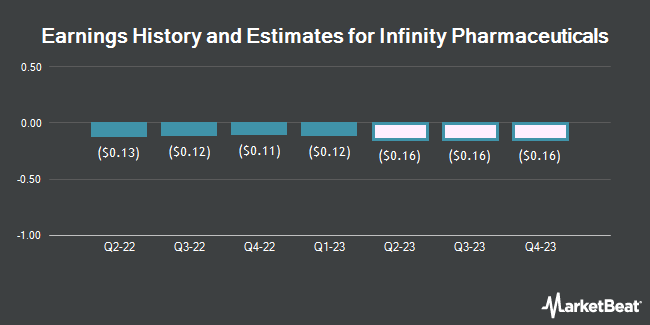 Complete the form below to receive the latest headlines and analysts' recommendations for Infinity Pharmaceuticals with our free daily email newsletter: