Equities analysts expect Novavax, Inc. (NASDAQ:NVAX – Get Rating) to announce sales of $1.04 billion for the current fiscal quarter, Zacks reports. Four analysts have provided estimates for Novavax’s earnings. The highest sales estimate is $1.13 billion and the lowest is $953.48 million. Novavax reported sales of $298.02 million during the same quarter last year, which indicates a positive year over year growth rate of 249%. The company is scheduled to announce its next quarterly earnings results on Monday, January 1st.

According to Zacks, analysts expect that Novavax will report full year sales of $4.22 billion for the current fiscal year, with estimates ranging from $3.69 billion to $4.58 billion. For the next financial year, analysts forecast that the business will post sales of $3.27 billion, with estimates ranging from $2.31 billion to $5.09 billion. Zacks Investment Research’s sales averages are a mean average based on a survey of research analysts that follow Novavax.

Novavax (NASDAQ:NVAX – Get Rating) last posted its quarterly earnings results on Monday, May 9th. The biopharmaceutical company reported $2.56 earnings per share (EPS) for the quarter, missing the consensus estimate of $3.33 by ($0.77). The firm had revenue of $703.97 million for the quarter, compared to analyst estimates of $845.20 million. Novavax had a negative net margin of 93.91% and a negative return on equity of 572.54%. The business’s revenue was up 57.4% on a year-over-year basis. During the same period in the prior year, the company posted ($3.05) earnings per share.

In related news, Director James F. Young sold 12,500 shares of the firm’s stock in a transaction dated Thursday, March 31st. The stock was sold at an average price of $73.58, for a total transaction of $919,750.00. Following the completion of the transaction, the director now owns 62,590 shares of the company’s stock, valued at $4,605,372.20. The sale was disclosed in a document filed with the Securities & Exchange Commission, which is available at this link. 2.10% of the stock is currently owned by company insiders. 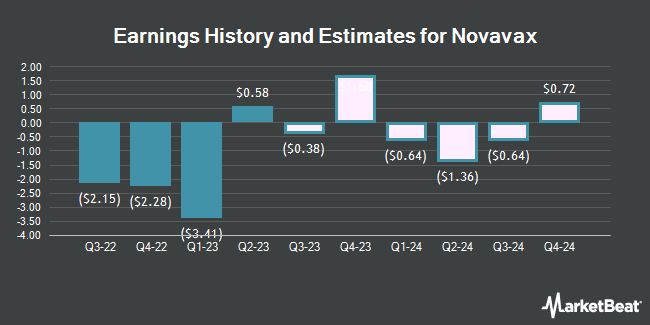