Brokerages expect that Upstart Holdings, Inc. (NASDAQ:UPST – Get Rating) will report earnings per share of $0.39 for the current quarter, Zacks Investment Research reports. Three analysts have provided estimates for Upstart’s earnings, with the highest EPS estimate coming in at $0.52 and the lowest estimate coming in at $0.25. Upstart reported earnings per share of $0.62 during the same quarter last year, which suggests a negative year-over-year growth rate of 37.1%. The company is expected to announce its next quarterly earnings results on Monday, January 1st.

On average, analysts expect that Upstart will report full-year earnings of $1.95 per share for the current fiscal year, with EPS estimates ranging from $1.58 to $2.16. For the next fiscal year, analysts anticipate that the business will post earnings of $2.49 per share, with EPS estimates ranging from $1.70 to $3.13. Zacks Investment Research’s EPS averages are an average based on a survey of research analysts that cover Upstart.

Upstart (NASDAQ:UPST – Get Rating) last released its quarterly earnings data on Monday, May 9th. The company reported $0.61 EPS for the quarter, topping analysts’ consensus estimates of $0.53 by $0.08. Upstart had a return on equity of 20.27% and a net margin of 15.23%. The firm had revenue of $310.14 million for the quarter, compared to the consensus estimate of $300.13 million. During the same quarter in the prior year, the company posted $0.12 earnings per share. The firm’s revenue was up 155.6% on a year-over-year basis.

Several research analysts recently commented on UPST shares. Piper Sandler cut Upstart from an “overweight” rating to a “neutral” rating and reduced their target price for the stock from $230.00 to $44.00 in a research report on Tuesday, May 10th. FBN Securities initiated coverage on Upstart in a research note on Tuesday, April 12th. They issued an “outperform” rating and a $150.00 target price for the company. Zacks Investment Research upgraded Upstart from a “sell” rating to a “hold” rating in a report on Thursday. Morgan Stanley cut their price objective on Upstart from $115.00 to $88.00 in a report on Wednesday, May 4th. Finally, The Goldman Sachs Group cut Upstart from a “buy” rating to a “neutral” rating and cut their price objective for the company from $250.00 to $40.00 in a report on Tuesday, May 10th. Two research analysts have rated the stock with a sell rating, nine have assigned a hold rating and three have given a buy rating to the company. According to MarketBeat.com, the company currently has a consensus rating of “Hold” and an average price target of $114.00. 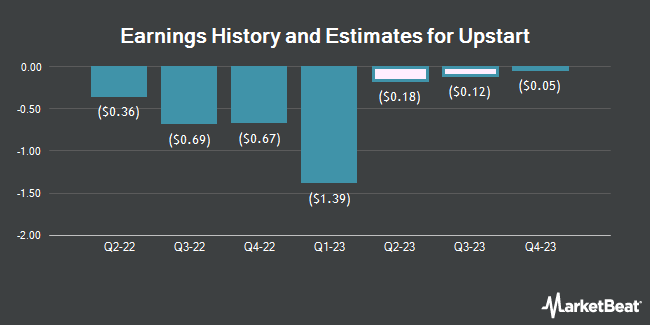