Wall Street analysts predict that Cytosorbents Co. (NASDAQ:CTSO – Get Rating) will report sales of $9.17 million for the current fiscal quarter, Zacks reports. Six analysts have made estimates for Cytosorbents’ earnings, with the highest sales estimate coming in at $10.20 million and the lowest estimate coming in at $7.87 million. Cytosorbents reported sales of $12.02 million in the same quarter last year, which indicates a negative year-over-year growth rate of 23.7%. The business is scheduled to announce its next quarterly earnings results on Monday, January 1st.

According to Zacks, analysts expect that Cytosorbents will report full year sales of $39.82 million for the current year, with estimates ranging from $36.77 million to $42.60 million. For the next fiscal year, analysts expect that the firm will post sales of $50.26 million, with estimates ranging from $41.67 million to $57.20 million. Zacks’ sales averages are an average based on a survey of research firms that that provide coverage for Cytosorbents.

Cytosorbents (NASDAQ:CTSO – Get Rating) last issued its earnings results on Tuesday, May 3rd. The medical research company reported ($0.21) earnings per share (EPS) for the quarter, missing the consensus estimate of ($0.15) by ($0.06). Cytosorbents had a negative return on equity of 44.65% and a negative net margin of 71.16%. During the same quarter in the previous year, the firm earned ($0.10) earnings per share.

Several research analysts have issued reports on the stock. B. Riley decreased their target price on shares of Cytosorbents from $7.00 to $6.00 in a report on Wednesday, May 4th. StockNews.com assumed coverage on shares of Cytosorbents in a research note on Thursday, March 31st. They issued a “sell” rating for the company. One research analyst has rated the stock with a sell rating and four have issued a buy rating to the company. Based on data from MarketBeat, the stock currently has a consensus rating of “Buy” and a consensus target price of $9.67.

Cytosorbents Corporation engages in the research, development, and commercialization of medical devices with its blood purification technology platform incorporating a proprietary adsorbent and porous polymer technology. Its flagship product is CytoSorb, an extracorporeal cytokine filter for adjunctive therapy in the treatment of sepsis, adjunctive therapy in other critical care applications, prevention and treatment of perioperative complications of cardiopulmonary bypass surgery, and maintaining or enhancing the quality of solid organs harvested from donors for organ transplant. 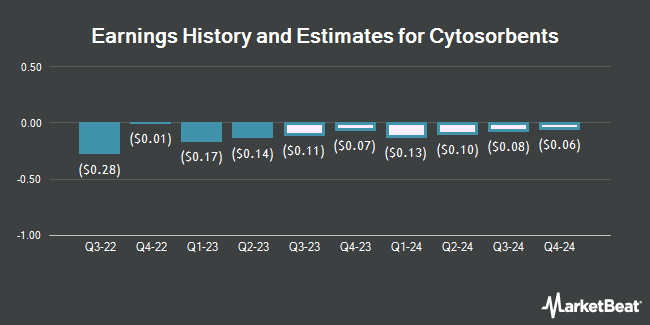 Complete the form below to receive the latest headlines and analysts' recommendations for Cytosorbents with our free daily email newsletter: