Brokerages forecast that Enviva Inc. (NYSE:EVA – Get Rating) will announce earnings per share (EPS) of $0.05 for the current quarter, Zacks Investment Research reports. Three analysts have issued estimates for Enviva’s earnings, with the lowest EPS estimate coming in at $0.00 and the highest estimate coming in at $0.09. Enviva posted earnings of ($0.05) per share in the same quarter last year, which suggests a positive year-over-year growth rate of 200%. The business is scheduled to announce its next quarterly earnings report on Monday, January 1st.

According to Zacks, analysts expect that Enviva will report full year earnings of $0.79 per share for the current year, with EPS estimates ranging from $0.69 to $0.88. For the next fiscal year, analysts anticipate that the firm will report earnings of $1.46 per share, with EPS estimates ranging from $1.35 to $1.57. Zacks’ earnings per share averages are an average based on a survey of research firms that follow Enviva.

In other news, Director Ralph Alexander purchased 1,614 shares of the stock in a transaction dated Thursday, March 3rd. The shares were purchased at an average price of $77.28 per share, with a total value of $124,729.92. The acquisition was disclosed in a legal filing with the SEC, which is available at this hyperlink. Also, EVP Yana Kravtsova sold 476 shares of the business’s stock in a transaction dated Monday, May 9th. The shares were sold at an average price of $76.08, for a total transaction of $36,214.08. Following the transaction, the executive vice president now directly owns 92,249 shares in the company, valued at approximately $7,018,303.92. The disclosure for this sale can be found here. Insiders own 13.30% of the company’s stock. 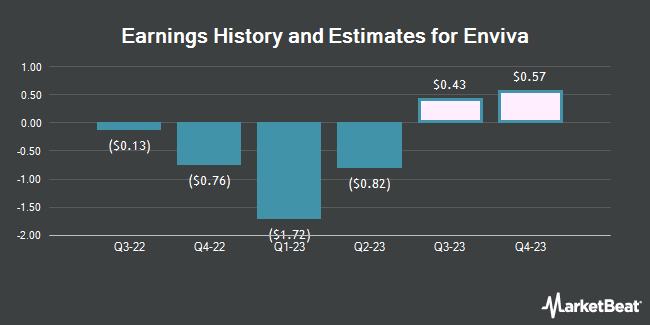 US Ecology Receives New Coverage from Analysts at StockNews.com

Caleres Downgraded by StockNews.com to Buy