$121.90 Million in Sales Expected for MicroStrategy Incorporated (NASDAQ:MSTR) This Quarter

Analysts predict that MicroStrategy Incorporated (NASDAQ:MSTR – Get Rating) will post $121.90 million in sales for the current quarter, Zacks reports. Two analysts have issued estimates for MicroStrategy’s earnings, with estimates ranging from $121.70 million to $122.10 million. MicroStrategy posted sales of $125.35 million during the same quarter last year, which suggests a negative year over year growth rate of 2.8%. The company is expected to report its next earnings results on Monday, January 1st.

According to Zacks, analysts expect that MicroStrategy will report full-year sales of $506.70 million for the current year, with estimates ranging from $498.00 million to $515.40 million. For the next financial year, analysts expect that the firm will post sales of $533.95 million, with estimates ranging from $526.20 million to $541.70 million. Zacks Investment Research’s sales averages are a mean average based on a survey of sell-side research firms that that provide coverage for MicroStrategy.

MicroStrategy (NASDAQ:MSTR – Get Rating) last announced its quarterly earnings data on Tuesday, May 3rd. The software maker reported ($10.42) earnings per share (EPS) for the quarter, missing analysts’ consensus estimates of $1.50 by ($11.92). The firm had revenue of $119.28 million for the quarter, compared to analyst estimates of $126.23 million. MicroStrategy had a negative return on equity of 30.40% and a negative net margin of 109.68%. The company’s quarterly revenue was down 2.9% on a year-over-year basis. During the same quarter in the previous year, the company earned $1.05 earnings per share. 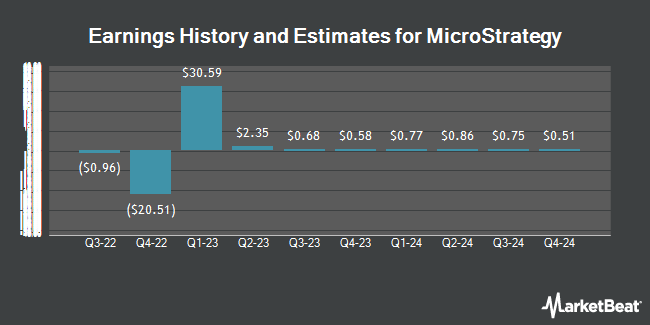