Consolidated Edison (NYSE:ED – Get Rating) updated its FY 2022 earnings guidance on Monday morning. The company provided earnings per share (EPS) guidance of $4.40-$4.60 for the period, compared to the consensus estimate of $4.49. The company issued revenue guidance of -.

Consolidated Edison (NYSE:ED – Get Rating) last released its earnings results on Thursday, May 5th. The utilities provider reported $1.47 earnings per share for the quarter, missing analysts’ consensus estimates of $1.51 by ($0.04). The firm had revenue of $4.06 billion for the quarter, compared to the consensus estimate of $3.71 billion. Consolidated Edison had a return on equity of 7.66% and a net margin of 10.88%. During the same quarter in the previous year, the firm earned $1.43 EPS. As a group, equities analysts forecast that Consolidated Edison will post 4.49 earnings per share for the current fiscal year.

The business also recently announced a quarterly dividend, which will be paid on Wednesday, June 15th. Stockholders of record on Wednesday, May 18th will be given a dividend of $0.79 per share. The ex-dividend date is Tuesday, May 17th. This represents a $3.16 dividend on an annualized basis and a dividend yield of 3.26%. Consolidated Edison’s payout ratio is 72.98%.

In related news, Director John Mcavoy sold 74,715 shares of Consolidated Edison stock in a transaction that occurred on Tuesday, February 22nd. The stock was sold at an average price of $84.69, for a total value of $6,327,613.35. The transaction was disclosed in a document filed with the SEC, which can be accessed through this link. Insiders have bought a total of 536 shares of company stock valued at $49,448 in the last three months. 0.13% of the stock is owned by insiders. 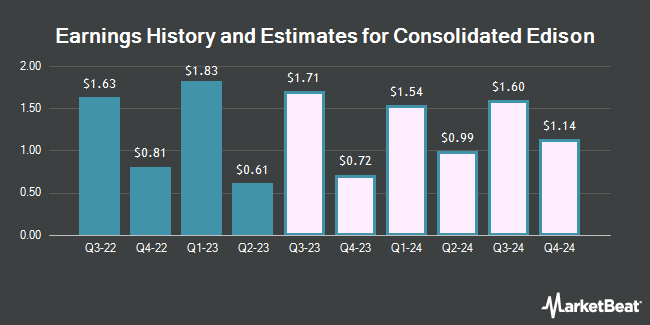