Gentex Co. (NASDAQ:GNTX – Get Rating) Director Gary F. Goode sold 2,845 shares of the company’s stock in a transaction on Friday, May 20th. The stock was sold at an average price of $30.17, for a total value of $85,833.65. Following the completion of the sale, the director now directly owns 27,861 shares in the company, valued at $840,566.37. The sale was disclosed in a filing with the Securities & Exchange Commission, which can be accessed through the SEC website.

The company also recently announced a quarterly dividend, which was paid on Wednesday, April 20th. Shareholders of record on Friday, April 8th were given a dividend of $0.12 per share. The ex-dividend date of this dividend was Thursday, April 7th. This represents a $0.48 dividend on an annualized basis and a yield of 1.62%. Gentex’s payout ratio is 34.29%.

Several brokerages recently weighed in on GNTX. Exane BNP Paribas began coverage on Gentex in a research note on Monday, April 11th. They issued an “outperform” rating on the stock. Zacks Investment Research raised Gentex from a “sell” rating to a “hold” rating and set a $31.00 price objective on the stock in a research note on Wednesday, April 27th. The Goldman Sachs Group decreased their target price on Gentex from $28.00 to $25.00 and set a “sell” rating on the stock in a research note on Tuesday, March 22nd. StockNews.com began coverage on Gentex in a report on Thursday, March 31st. They set a “hold” rating for the company. Finally, Robert W. Baird raised their price target on Gentex from $33.00 to $34.00 in a report on Monday, April 25th. One investment analyst has rated the stock with a sell rating, two have given a hold rating and six have given a buy rating to the company’s stock. According to data from MarketBeat.com, Gentex has a consensus rating of “Buy” and an average target price of $33.38. 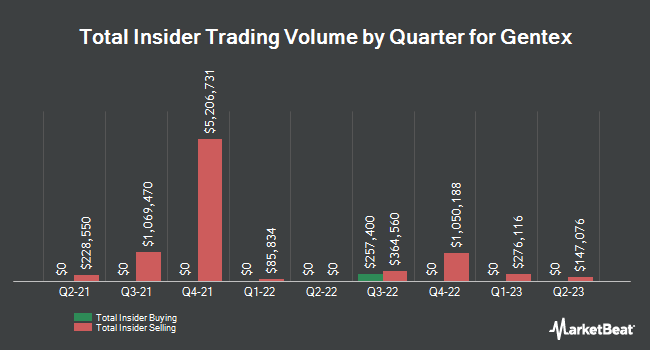